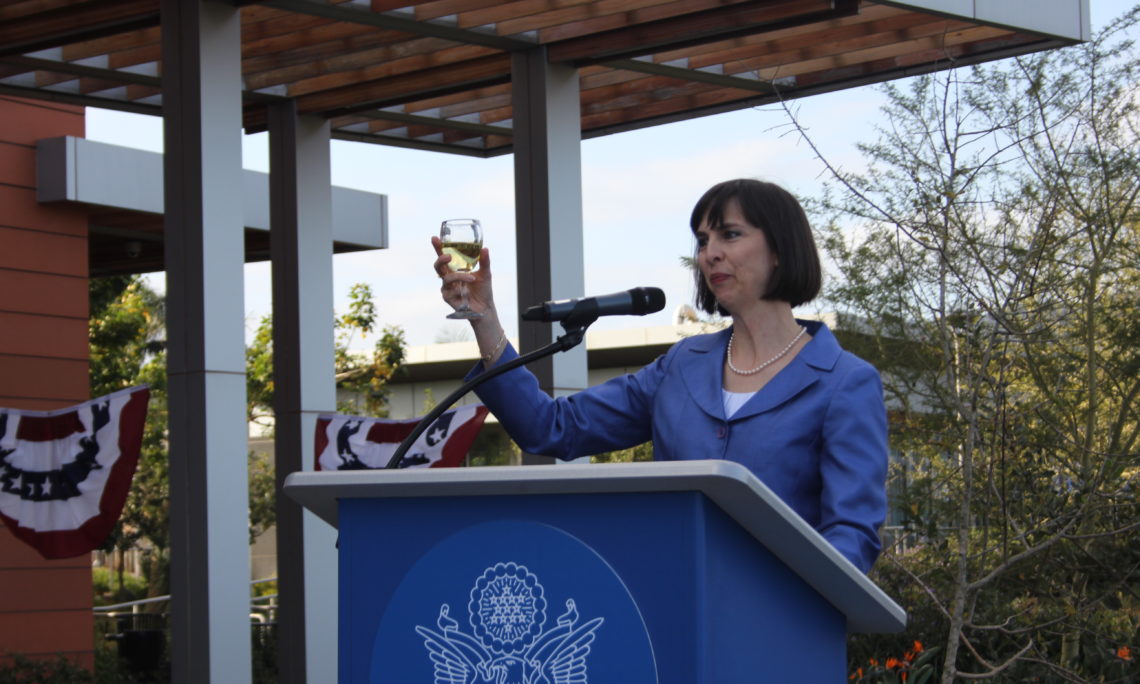 Thank you for joining us today as we celebrate the 241st anniversary of independence of the United States of America. I want to especially thank our sponsors – Swaziland Beverages, Mondelez International, D.D. Williamson, and FedEx – for supporting today’s event.

“We hold these truths to be self-evident, that all men are created equal, that they are endowed by their Creator with certain unalienable Rights, that among these are Life, Liberty and the pursuit of Happiness.” These bold words of the United States’ founding fathers showed an immediate contradiction: the Declaration of Independence did not extend these freedoms to African Americans or to women. At the United States’ first women’s rights convention in Seneca Falls, New York, the Declaration of Sentiments clarified “that all men and women are created equal”. The revolutionary leaders of this event called for women’s autonomy, better education and viable employment opportunities for women. After this convention, it took 72 years of organized marches, civil disobedience, and protests before women would achieve the right to vote in the United States. Today, women in the United States and around the world continue to struggle for gender equality.

Gender equality is not just something that women should care about, or something that would be nice to achieve. When women fully participate in all aspects of society – politically, economically, and socially – they effect large-scale and lasting change. When women work, economies grow at a faster rate. According to UN Women, when girls are educated, there is a multiplier effect in numerous development areas, especially health and poverty reduction. Women also tend to reinvest their earnings in their families at a significantly higher rate than men.

My staff and I are especially passionate about women’s and girls’ rights. We need that passion, because gender equality cuts across all our areas of engagement in Swaziland. It determines the success of our investment and partnership in the fight against HIV/AIDS. And it will determine how effectively Swaziland responds to challenges and opportunities, including the wave of young people about to wash over all aspects of your public policies.

Through our PEPFAR support to Swaziland’s HIV response, we are making tremendous progress in improving the numbers of people on antiretrovirals. But there is still much work to do in prevention, especially for young women between the ages of 15 and 24 who still have the highest rates of new HIV infections. Young women’s vulnerability is exacerbated by many factors including the high rate of gender-based violence in the country, the low rate of justice for such acts, and ultimately the lack of a sexual offences law that truly protects women. Our DREAMS activities work to reach these young women and help them make strong life choices, from delaying the start of sexual activity to staying in school. Peace Corps’ GLOW Clubs help develop girls who are confident and motivated. I’ve had the good fortune to meet the incredible Swazi women who volunteer their time to serve as GLOW counselors and show these young women empowerment in action. But as the Queen Mother, Indlovukazi, recently reminded me, we cannot do this by focusing on only one side of the equation. If we are going to protect young women, we also need to be working with men. So our activities also strive to engage men to improve their health status; to use all methods to protect themselves, their families and communities; and to uphold positive male role models.

Educational opportunities are critical to shrinking the gender gap, particularly in the areas of science, technology, engineering, and math, or STEM. In the past year, we brought in the director of software engineering at Twitter to teach 100 girls the basics of coding. We worked with one of our current Mandela Washington Fellows at eWorld Technology Group to conduct a coding workshop for nearly 50 girls, who started work on a mobile app to raise awareness about gender-based violence. We worked in partnership with MTN and the STEM Foundation Swaziland to provide robotics sets and coaching to 27 schools. In a robotics competition at the end of this activity, an all-girls team from St. Michael’s High School came out on top. A young man on a rival team at that event, when asked why his team had only one girl, replied that girls aren’t as smart as boys. While it’s great that the girls at St. Michael’s proved this young man wrong, we should be mindful that he did not, by himself, create a belief of boys’ superior intelligence. This kind of belief will chip away at girls’ confidence throughout their lives if left unchanged. According to UN Women, girls worldwide start to self-select out of STEM courses in early secondary school, in part because science and technology are often considered male domains.

Sadly, the work that we and others are trying to do in the area of girls’ education is not yet enough to close the economic gender gap. It’s been 169 years since Seneca Falls, and according to the World Economic Forum, it could be nearly another 169 years before women achieve economic equality. Swaziland has significant gender inequalities in the areas of labor force participation, wages, and representation at the top levels of business and government. We recognize that Swaziland’s loss of AGOA eligibility was an especially strong blow to women, given their large presence in the textile industry. The government has been working closely with us to meet the AGOA benchmarks and we’ve seen real progress. But even if Swaziland regains AGOA in the coming year, Swazi women will be more vulnerable than their male counterparts to changes brought on by new technologies, which are projected to have heaviest impacts on jobs that employ a majority of women. Estimates show that up to 90 percent of formal sector jobs will require skills in information and communications technology.

The challenge is to find new ways to get out ahead of this anticipated change. If we don’t encourage women and girls to pursue studies and careers in the STEM fields now, we ultimately inhibit our ability to fully address the challenges we face, from economic progress to social conditions. If we do make these investments now, Swaziland could have the opportunity to leap-frog over old practices, in much the same way that Africans used mobile phone technology to overcome traditional barriers in sectors such as banking.

As you entered, you saw posters highlighting a handful of remarkably talented American women doctors, scientists, engineers, and mathematicians. These great American women in science embody innovation, ambition, and perseverance. Their groundbreaking work, often performed under difficult and discriminatory social systems, has benefitted the world. We recognize them today – and other unsung she-roes like them – as a reminder that the future does not have to echo the past. We must not subject one gender or one group to the same inequitable treatment that their predecessors suffered. Our roles – as leaders and as citizens of the world – should be to make the path a little easier for those next in line.

Over the coming year, we are hoping to work with school girls to build a Swazi version of that poster show – but online – to raise awareness around Swazi women who have had an impact in their communities or their field of work. From Swaziland’s first female PhD Lydia Makhubu to artists like Velemseni, we want to provide space to help Swazi girls tell the stories of Swazi women who inspire them.

If all these pieces are to come together, women need a stronger voice in public policy. Any government action, from bucopho to parliament, can affect women. Yet women have a very small portion of the voices in elected offices. In fact, Swaziland has the lowest level of women’s representation in parliament within the SADC region. His Majesty the King has called for women to strategize on how to increase women’s representation in public office in next year’s elections. Vigorously responding to his call will help Swaziland gain the perspectives and experiences that can bring policy and legislation to a level that better benefits all Swazis.

Whether through our partnership in the fight against HIV/AIDS, our efforts to provide new learning tools to Swazi youth, or possible new engagements around economic opportunities, the U.S. Mission in Swaziland will continue to seek new and innovative ways to partner with the Swazi government and people. Over the past 49 years, the partnership between the United States and the Kingdom of Swaziland has shown what we can achieve together. If we can join forces and make progress on gender equality, just imagine how much more we can accomplish.