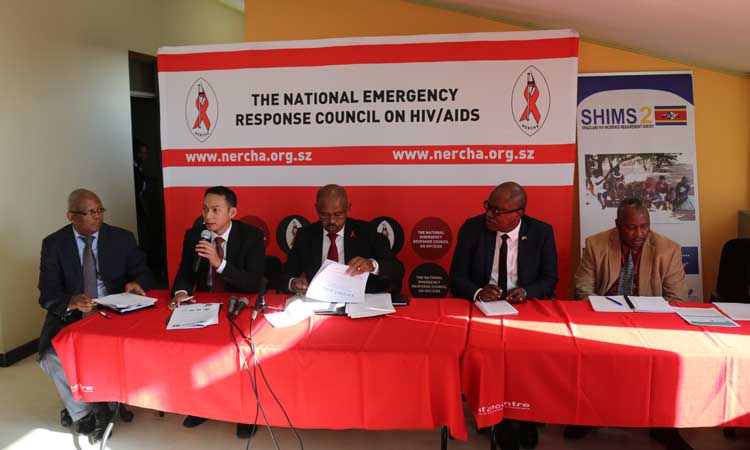 Key findings from the second Swaziland HIV Incidence Measurement Survey, SHIMS 2, 2016, reveal impressive progress in confronting the HIV epidemic in the country. Results show a doubling in population viral load suppression since 2011 and a decrease by nearly half in the rate of new HIV infections. The findings were released on July 24, 2017 at a press conference held by the Prime Minister’s office in Mbabane, Swaziland and at the International Aids Society (IAS) 2017 Conference in Paris, France.

“Because of the severe HIV epidemic in Swaziland, it was critical for us to implement a combination HIV prevention package, scale up HIV care and treatment services, and engage in ongoing measurement of HIV incidence in order to assess the impact of these efforts,” said Senator Sibongile Ndlela-Simelane, the honorable Minister of Health, Swaziland. “The results of the SHIMS 2, 2016 survey reveal a dramatic improvement in the state of the epidemic in Swaziland and we are very encouraged by this progress. We understand that the battle is not over, and therefore we must maintain the momentum.”

The data come from one of the population-based HIV impact assessment (PHIA) surveys led by the Government of the Kingdom of Swaziland (GKoS) through the Ministry of Health (MOH) and Central Statistical Office (CSO). The survey (SHIMS 2, 2016) was implemented by ICAP at Columbia University and the U.S. Centers for Disease Control and Prevention (CDC), with funding from the U.S. President’s Emergency Plan for AIDS Relief (PEPFAR).

SHIMS 2, 2016 is the second national incidence survey to be conducted in Swaziland, following the 2011 survey (SHIMS1) among adults 18-49 years of age.

In SHIMS 2, 2016 over 14,000 children and adults participated in this nationally representative survey by agreeing to be interviewed and providing a blood sample for HIV testing.

The progress represented by the findings is attributed to the expansion of HIV testing in the country as well as a substantial increase in the number of HIV-positive individuals on antiretroviral drugs from 2011 to 2016. This is combined with other HIV control interventions expanded in the country.

“These remarkable findings from Swaziland add to the evidence base that we are beginning to control the HIV epidemic in several high-burden countries,” said Ambassador Deborah L. Birx, M.D., U.S. Global AIDS Coordinator and Special Representative for Global Health Diplomacy. “They both demonstrate our extraordinary progress in ensuring that older HIV-positive adults are on life-saving treatment and virally suppressed as well as reveal key gaps that remain in reaching younger men and women with HIV services.”

“An amazing array of partnerships lasting over a decade – from collaboration within and between governments to coordination across international organizations and implementers – have brought us to an incredible level of success in the work on HIV and AIDS in Swaziland,” said Lisa J. Peterson, U.S. Ambassador to Swaziland. “These partnerships are about people bringing their time and talents together to effect change. Thanks to these joint efforts, the SHIMS 2, 2016 data show that many more people will have the opportunity to share their own time and talents with their families and communities. It is especially important that we sustain and strengthen our collective engagement with Swaziland’s youth to ensure that we achieve an AIDS-free generation.”

“The partnership with the Swazi Ministry of Health was fundamental to the success of the survey,” said Shannon Hader, MD, MPH, Director of the CDC’s Division of Global HIV & TB. “As we’ve seen in other countries, the PHIA findings will help the Ministry of Health and its partners to focus resources on urgent program priorities to achieve epidemic control.”

“The findings from SHIMS2 are a testimony to the remarkable commitment by the Government of Swaziland in confronting the HIV epidemic,” said Wafaa El-Sadr, MD, MPH, MPA, director of ICAP. “It is a demonstration that all the efforts put into the scale-up of HIV prevention, care and treatment services have borne fruit. ICAP is honored to have played a role in helping to support this successful scale-up.”

“Each Population-based HIV Impact Assessment – PHIA – survey provides a ‘report card’ on how each country is doing in responding to its epidemic as well as a blueprint for future response,” said Jessica Justman, MD, ICAP’s senior technical director and principal investigator of all of ICAP’s PHIA projects, including SHIMS1 and SHIMS 2, 2016. “Swaziland has made notable progress and is poised to continue making great strides forward with the implementation of test and start and ongoing scale-up of routine viral load monitoring. The SHIMS 2, 2016 results will help focus efforts and prioritize specific populations in need of urgent attention and innovative approaches.”

Additional details on SHIMS 2, 2016 are available in the SHIMS summary sheet released by the Swaziland Ministry of Health and the websites for the Ministry of Health www.gov.sz , CDC/PEPFAR www.cdc.gov and state.gov/pepfar/ , and ICAPs PHIA Project: phia.icap.columbia.edu.