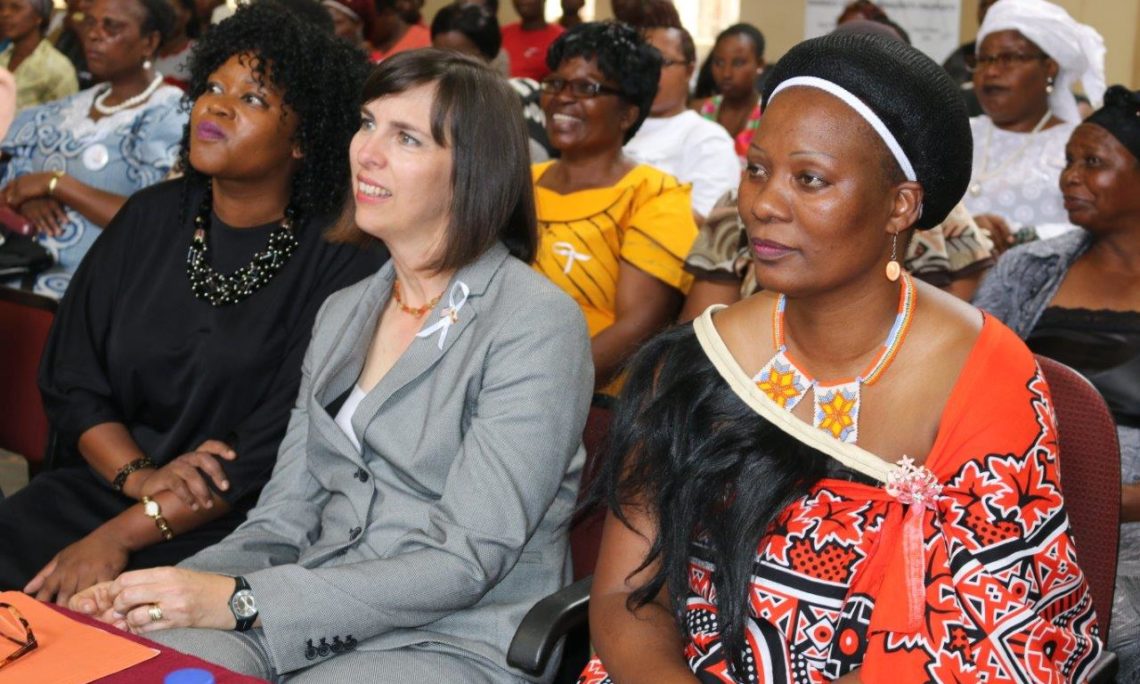 Chairperson of the Gender Consortium;

Gender Officer from the Swaziland National Association of Teachers;

I am honored to be part of this event organized by women, for women, and about women. I could not think of a better way to end the 16 Days of Activism Against Gender-Based Violence. So thank you to Colani and the staff at Women and Law in Southern Africa for organizing this gathering.

I was recently asked what I found most surprising as a newcomer to Swaziland.  The answer unfortunately came rather quickly to me: I am astonished at the high rates of gender-based violence here. Nearly 8 out of ten Swazi women can expect to suffer some type of physical or sexual violence at some point in their lives. Globally, women fare only slightly better, with one in three women falling victim to domestic abuse, rape, sexual trafficking, or violence, according to the World Health Organization. The list of depressing statistics regarding the state of women runs long. From the school yard to the board room, women and girls face staggering odds to break the entrenched barriers of gender inequality and patriarchy.

But history shows us that we don’t have to just put up with violence, accept it as a norm in our lives.  In the United States, after the passage of the Violence Against Women Act, the incidence of intimate partner violence fell by 67 percent between 1993 and 2010.  This notable drop is partly a result of the comprehensive approach of the Act, which combined tough new provisions to hold offenders accountable with programs to provide services for the victims of violence.  But ultimately, it was the passage of the Act itself that signaled that lawmakers had come to recognize that there was a severe problem of violence against women and they needed to create a national strategy to effectively address this problem.

In my time in Swaziland, I have heard much discussion about the Sexual Offenses and Domestic Violence Bill, which has languished in Parliament for years. Without comprehensive legislation and commensurate enforcement, Swazi women will continue to suffer – and die – at the hands of intimate partners, relatives, and strangers who commit crimes with impunity. There can be no justification for leaving half of the population vulnerable to rape, sexual assault, abuse, and violent attacks.

Violence against women is rooted in attitudes and beliefs that reinforce inequality, disadvantage, and power differences.  So, while we all need to continue working toward legislative foundations to protect women from violence, we also need to work on the larger picture of gender equality.  The United States still has its own battles to fight on gender equality.  Only 19 percent of Representatives and Senators are women in a country where women are half the population.  Nevertheless, gender equality has been front and center during the Obama Administration. In June of this year, First Lady Michelle Obama hosted the White House United State of Women Summit, with a primary focus on advancing gender equality. She, like many other top women officials in the administration, has worked hard to elevate the voices of all American women.

Likewise, in Swaziland, by hosting this national dialogue, you are sending an important message not only to your families and fellow citizens but also to your government officials. Women’s rights are human rights. Emalungelo abomake ngemalungelo ebantfu bonkhe. And it is time for Swazi women to take their rightful place alongside men, with dignity, respect, and recognition.

There are some points about gender equality that I suspect you already know, but they are always worth repeating.  When women fully participate in all aspects of society – politically, economically, and socially – they effect large-scale and lasting change. When women work, economies grow at a faster rate. According to UN Women, when girls are educated, there is a multiplier effect in numerous development areas, especially health and poverty reduction. Women also tend to reinvest their earnings in their families. For every dollar she earns, a woman will invest roughly 80 cents back into her family, providing better education and nutrition for her children and making sound financial decisions for the family. Men, on the other hand, reinvest only 30 cents per dollar, on average, in their families.

While men are critical to advancing the fight for gender equality, it is even more important that we, as women, seek out every opportunity to support each other. At home, are we using language that empowers our daughters as much as our sons?  In our communities, are we speaking out when we see violence against our neighbors? Are we celebrating the successes of our fellow women, whether in the community or at work?  The type of language we use with one another matters, publicly and privately. Therefore, the road to gender equality starts with women valuing, supporting, and uplifting other women.

I mentioned before the value of repeating key points, and I’d like to share with you a story that came out of the Obama White House.  Women working for the President were outnumbered by men, were overlooked for participation in important meetings, and when they did get into such meetings sometimes felt their voices were ignored.  So a group of women adopted a strategy they called “amplification.”  When a woman made a key point, other women would repeat it and give credit to the original woman.  The President noticed and started calling more frequently on women.  This is a simple concept but one that, if applied with persistence, can make a difference in ensuring that women’s ideas and voices are heard.

In the coming weeks, the U.S. Embassy will launch a Gender Working Group whose aim is to develop and coordinate gender initiatives within our Mission. Our goal in starting this Working Group is to better integrate gender equality and women’s empowerment into all of our programs, policies, and approaches. It will not only be a mechanism for coordinating among our different agencies, but it will also serve as a driving force to achieve specific goals around economic empowerment, access to justice, and expanding opportunities for women and girls in Swaziland.

In 1848 in the town of Seneca Falls, New York, 300 women and men gathered for “a convention to discuss the social, civil, and religious condition and rights of woman.”  This was the United States’ first women’s rights convention and laid the foundation for all subsequent efforts at gender equality, from the right to vote to property rights to fighting abuse.  In 2016 in the town of Nhlangano, Shiselweni, you all are gathered for a National Women’s Dialogue to cultivate solidarity to end violence against women and girls.  By convening Swaziland’s best champions for equality, you strengthen your network of resources to know, understand, and advocate for your rights. Through collective action, women can build on this dialogue and start working together to overcome the impediments to their full participation in Swazi society.  May your efforts here today leave a legacy as great as that from Seneca Falls.