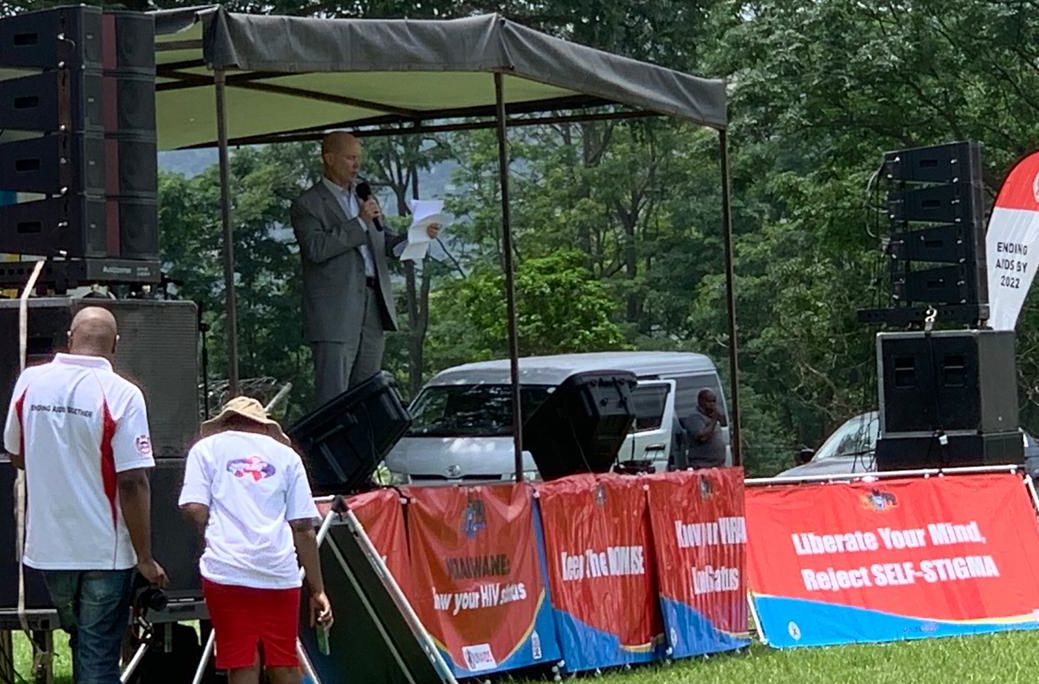 I am honored to be here today in recognition of World AIDS Day and of the tremendous progress the Kingdom of Eswatini has made in fighting the HIV/AIDS epidemic.  This year marks the 15th anniversary of the U.S. President’s Emergency Plan for AIDS Relief (PEPFAR) in Eswatini.   Through PEPFAR and U.S. contributions to the Global Fund to Fight AIDS, Tuberculosis and Malaria, the U.S. government has invested more than $85 billion in the global HIV/AIDS response.  In Eswatini alone, PEPFAR has invested more than 500 million U.S. dollars in assistance to combat the epidemic.  This remains the largest commitment made by any nation ever to address a single disease, and with this investment, we are saving lives.

Fifteen years ago, when PEPFAR began work in Eswatini, HIV was a death sentence.  In 2004, fewer than 500 people in Eswatini were on anti-retroviral therapy.  Now with support from PEPFAR and our implementing partners, more than 190,000 adults and children are receiving HIV treatment, predominantly at Ministry of Health clinics, and in the last year PEPFAR-supported services initiated 17,381 people on HIV treatment. Today, we have the historic opportunity to make what once seemed impossible possible: controlling and ultimately ending the HIV/AIDS epidemic, community by community.

The theme of this year’s World AIDS Day is “Communities make the difference,” which highlights the vital role communities play in controlling and combatting the epidemic.  In Eswatini, 70 percent of the population lives in rural areas, so PEPFAR works hand-in-hand with traditional structures to empower local communities to develop and carry out their own plans for providing health services.  In 25 Tinkhundla, across the four regions of Eswatini, we have supported 132 chiefdoms in taking ownership of plans, policies, and health service provision in their communities, and this is how change becomes lasting.

By mobilizing communities, committing domestic funds to programming, and translating resources from PEPFAR and the Global Fund into impactful programs that reach people with HIV prevention and treatment services, Eswatini has achieved remarkable progress in HIV/AIDS. We are seeing major declines in new HIV infections and reductions in the number of deaths among people living with HIV.

PEPFAR’s work in Eswatini is also firmly focused on the populations that data show are being left behind—such as young women and men, and vulnerable children—by scaling up innovative approaches to reach them at the community level.  We work to make sure all ages, genders, and at-risk groups are able to know their HIV status, receive lifesaving HIV prevention and treatment services, and be virally suppressed if they are HIV-positive.

PEPFAR is also strengthening the systems that drive effective, innovative, and sustainable health care provision.  This year in Eswatini, PEPFAR launched a program to work in close collaboration with the faith and traditional communities to address key gaps in achieving HIV epidemic control and ensuring justice for children.

By harnessing the unique capabilities and compassion of faith-based organizations and communities, we can reach young men, adolescent girls and young women, and HIV-positive children with HIV prevention and treatment services.  In this way, we can also focus on the prevention of sexual violence against children and justice for victims of such abuse, thereby limiting the numbers exposed to the associated effects of lasting trauma and increased risk of HIV infection.

In Eswatini, and around the world, death and despair have been replaced with vibrant life and hope.  According to UNAIDS, AIDS-related deaths have been cut by 55 percent around the world since their peak in 2004, and new HIV infections have been reduced by 40 percent since their peak in 1997.  In Eswatini, new HIV infections declined by over 40 percent between 2011 and 2017.

But challenges remain.  Although new infections are down, young people are still being infected at high rates.  Last year, an estimated 7,000 new HIV infections occurred among emaSwati—more than a third are young people aged 15-24.

Further, we know that HIV often takes an out-sized toll on young women and girls, due to the power imbalance that feeds gender-based violence.  This exposes women—especially very young women—to heightened risk of exposure to HIV.  If you look at Eswatini’s HIV infection rates, you will see that young women do not appear to be having sex with men of their own age group.  Until age 14, HIV infection rates among boys and girls are similar.  Between the ages of 15 and 19, new infection rates for young women start to nearly double those for their male peers.  Between the ages of 20 and 24, women’s new infection rates increase even more dramatically, with a young woman five times as likely as her male counterpart to be HIV positive.  Young women in Eswatini face an unacceptably high risk of being the victim of sexual assault. Until that epidemic is addressed, girls will continue to suffer the dual burden of sexual violence and HIV.

We must address this fundamental problem. In the short-term, men must reject the idea that it is acceptable to exploit their more powerful position in society to force or unfairly entice younger women to consent to sex.

In the longer-term, the goal should be to empower women so that they share social, political, and economic equality with men.  Failure to act would result in a drain on the physical, mental, and economic health of entire communities.

Since 2015, PEPFAR has had a flagship public-private partnership that has invested nearly one billion US dollars across the world for adolescent girls and women, enabling them to be Determined, Resilient, Empowered, AIDS-Free, Mentored, and Safe, a program known by the acronym DREAMS.  In Eswatini the DREAMS has delivered services to adolescent girls and young women, allowing them to receive small group counselling focused on gender-based violence and HIV prevention, as well as HIV testing, family planning support and condoms, as well as other services, all delivered primarily through mobile outreach vans.

We have also supported the Ministry of Health to screen more than 27,000 HIV-positive women for cervical cancer, the leading form of cancer killing women in Eswatini – the country with the highest rates of this disease worldwide.

This screening allows the identification of lesions before they become cancer, enabling preventative treatment and saving women’s lives.

The response to the HIV epidemic begins at the community. In the very early days there were no government programs, no international donors, no medications, and communities took care of the sick, dying and orphaned, while struggling to understand and cope with the devastation caused by the disease. Now, we have the tools to end this epidemic, alongside strong, resourceful and engaged communities ensuring that no one is left behind.  Through the PEPFAR program, the U.S. government stands with you as we move forward, supporting Eswatini’s communities in reaching an AIDS-free generation.

In closing, I would like to recognize the government of the Kingdom of Eswatini for its unwavering commitment to control the HIV epidemic.  This commitment has allowed rapid progress, and the country is now fast approaching the 95-95-95 goal and epidemic control.  Thank you to the implementing partners for their tireless work to support the program and people of Eswatini in preventing HIV and helping those with HIV to live long, productive lives.

And, I offer my deep gratitude and respect to those everyday heroes, either affected by or infected by HIV, who advocate for and inspire others, who offer a shoulder to lean on to a relative, friend or neighbor, and who help reduce the burden by talking about HIV.  It is not an infection that defines us, but rather, it is our strength, courage, and compassion to move forward and prosper in the face of adversity.