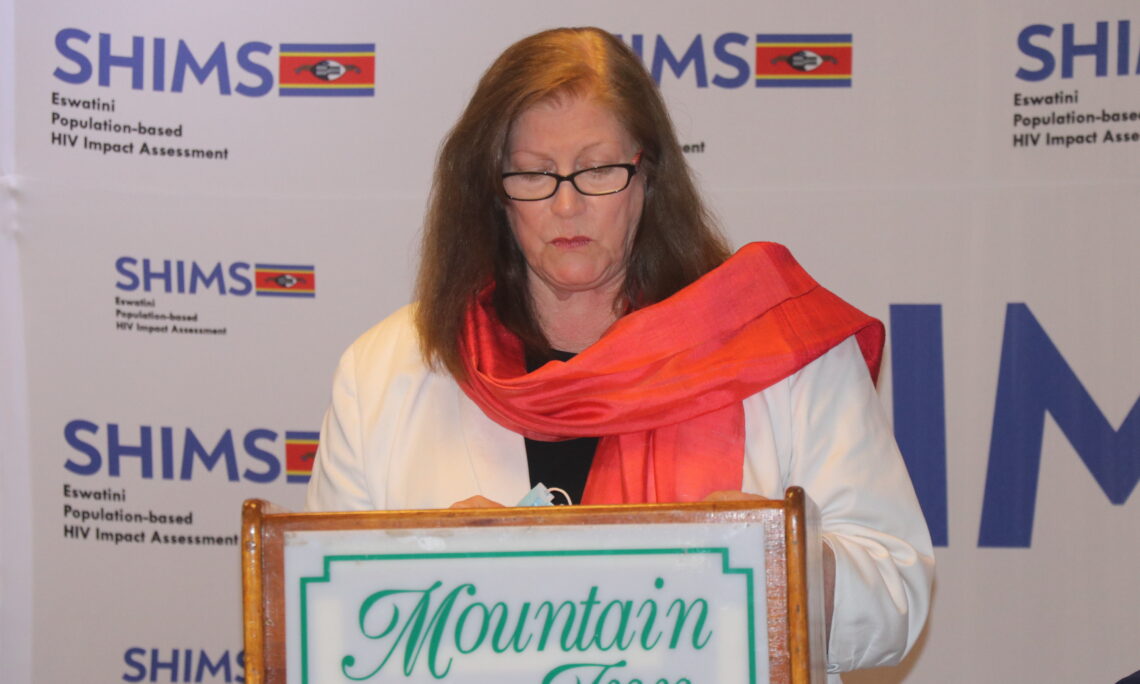 I am honored to be here today as we collectively recognize and celebrate the tremendous achievements the Kingdom of Eswatini has made in the fight against HIV/AIDS. To have surpassed the UNAIDS Fast-track Targets for treatment and viral suppression, even in the midst of multiple and overlapping crises, is truly commendable.

Over the last several decades, we have witnessed the devastating impact of HIV on the country. The social and economic toll has been tragically high, causing great personal loss and suffering. Over seventeen years ago, when the U.S. Government, through PEPFAR, began its partnership with the Government of the Kingdom of Eswatini to combat HIV, it was estimated that there were 160,000 people living with HIV, yet fewer than 500 of them – less than 1% – were on antiretroviral therapy. The life expectancy in the country had plummeted to 42 years. And over 3,300 infants were being born with HIV each year.

The SHIMS1 and SHIMS2 surveys, conducted in 2010 and 2016, respectively, measured important milestones in Eswatini’s journey towards controlling the epidemic.

Today, as the SHIMS3 cascade results mark another milestone in this journey, we stand here bearing witness to the remarkable power in uniting toward a common goal, the power of partnerships, the effective use of evidence-based tools, and the result of having the courage to take action even against the backdrop of one of the most severe epidemics in the world. To highlight just a few of the successes we should all be proud of:

· life expectancy has returned to pre-HIV epidemic levels of over 60 years;

· over 95 percent of people who know their HIV status are benefitting from life-saving antiretroviral therapy; and

· fewer than 500 infants are born with HIV each year.

This is truly a moment of celebration, and the U.S. Government, through PEPFAR, is proud to be a financial and technical partner in this response.

The U.S. Government, through PEPFAR, remains a committed partner with an additional $71 million U.S. dollars invested in Eswatini’s HIV response in the coming year.

Earlier this week, President Biden pledged $6 billion dollars over three years to the seventh Global Fund replenishment as a demonstration of the U.S. Government’s continued prioritization of the fight against HIV, TB, and Malaria.

Even as we celebrate the incredible successes of the journey thus far, let us remember that our work is not done. We are fortunate in that we have all the tools we need to combat and control the HIV epidemic to close existing gaps and to protect the generations to come. We have safe and effective medication available for all people living with HIV. We have established systems to minimize clinic visits while monitoring treatment efficacy to support people to live productively with HIV as a chronic condition. As mentioned earlier, it is notable that fewer than 500 infants are born with HIV each year. But we can and must do better. We have effective prevention HIV options like PrEP, a once-a-day pill proven to prevent HIV acquisition, and voluntary medical male circumcision which reduces the risk of HIV among men by 60 percent. But as both program and SHIMS3 data confirm, we must more effectively reach our youth and men with these interventions. Engaging them in dialogue to ask where we are falling short and involving them in finding solutions will be critical to identifying those who are not yet aware of their positive status and maintaining viral suppression among those who are on treatment. No innocent child should be born with HIV.

We must also recognize and collectively address the threats that have the potential of reversing our progress and acting as barriers to equitable control of the epidemic. Emerging public health threats, such as COVID-19; a large, vulnerable youth population; increasingly unpredictable environmental conditions; and limited economic opportunity collectively present real risks that threaten this progress we have worked so hard to accomplish together. We must redouble our efforts to not only sustain the gains made but continue to advance them. In order to do so, we must continue to strengthen public health systems, address socio-economic threats, and protect human rights. The recent UNAIDS report “In Danger,” states that “every two minutes in 2021, an adolescent girl or young woman was newly infected with HIV.”

Drivers of new infections, such as social and gender inequalities and gender-based violence, and barriers to equitable access to services for marginalized and vulnerable populations, must be directly addressed through a government-led, coordinated, multisectoral response if equitable health outcomes are to be realized for all populations. Failure to do so will undermine these hard-earned successes we celebrate today.

The U.S. is proud to invest in the future of emaSwati by addressing health threats such as HIV, and by the same token we must also work together to help Eswatini heal from last year’s civil unrest. As we look to the government of the Kingdom of Eswatini to communicate details on preparations for the national dialogue it committed to support, we encourage emaSwati to engage now in meaningful, inclusive, and peaceful community-level dialogue to build understanding and trust. As renowned U.S. pastor and civil rights activist Martin Luther King, Jr. said, “the old law of an eye for an eye leaves everybody blind. Violence is immoral because it thrives on hatred rather than love. It destroys community and makes brotherhood impossible. It leaves society in monologue rather than dialogue.”

Working together, the citizens of this country can identify shared values and goals, and support a process that will promote healing for the entire country. This is a moment of historic importance in Eswatini.

I hope by realizing what we have achieved together, it will propel us to reach even greater heights for a fully equitable response to the HIV epidemic. We laud the Government of Eswatini’s ongoing investment in its HIV response and encourage renewed energy and leadership as we enter a new phase of the epidemic. The U.S. Government, through PEPFAR, looks forward to furthering our partnership to secure a future that is free from the threat of HIV for all emaSwati.

I thank you. Siyabonga.