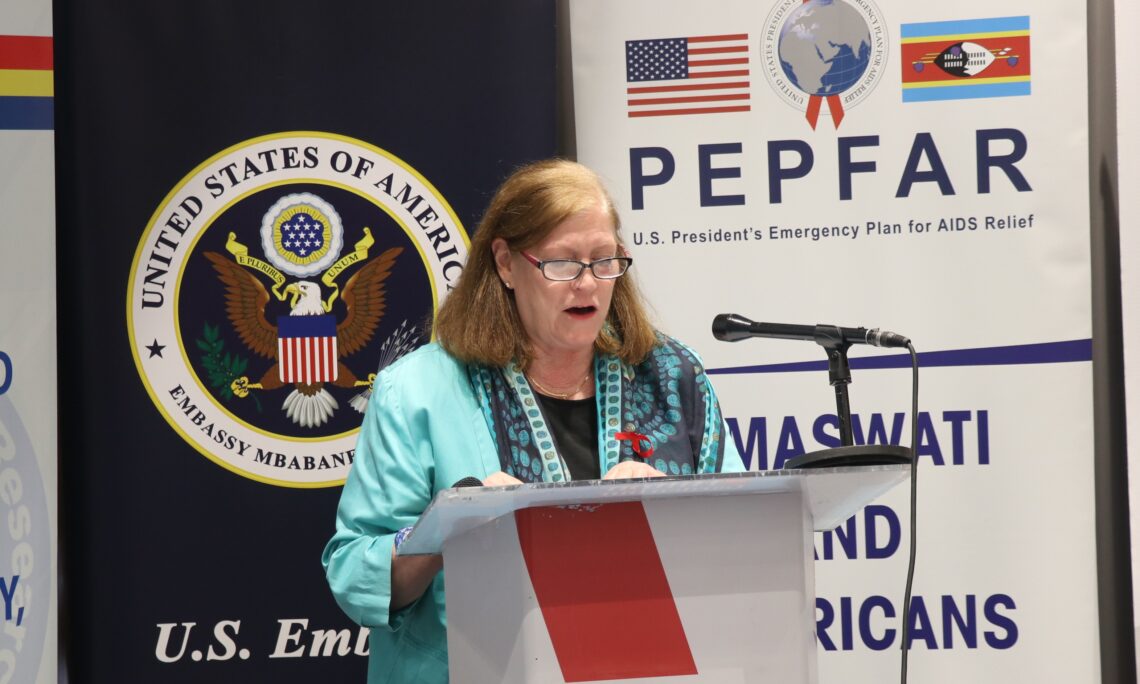 I am honored to have another opportunity to recognize the remarkable results demonstrated by the SHIMS3 survey.

As more results from the survey are made available, I am increasingly struck by how much the HIV epidemic landscape has changed here in the Kingdom of Eswatini over the last two decades.

As I mentioned at the prior dissemination event, when the U.S. Government, through PEPFAR, began its partnership with the Government of the Kingdom of Eswatini more than 17 years ago, there were an estimated 160,000 people living with HIV, yet fewer than 500 of them – less than 1% – were on antiretroviral therapy. The life expectancy in the country had plummeted to 42 years. And over 3,300 infants were being born with HIV each year.

Today, through the political and technical leadership as well as financial commitment by the Government of the Kingdom of Eswatini in partnership with the U.S. Government and so many other critical partners, the achievements have been truly notable:

· life expectancy has returned to pre-HIV epidemic levels of over 60 years;
· more than 95 percent of people who know their HIV status are benefitting from life-saving antiretroviral therapy; and
· fewer than 500 infants are born with HIV each year.

I take this opportunity to restate these points, because I believe that they offer a different perspective on this journey the country has been on. They serve as an added testament to how Eswatini’s data-driven and evidence-based response has translated into broad population-level impact that continues to bend the curve of the HIV epidemic and pave an increasingly hopeful path for future generations of emaSwati.

Understanding where we have come from can help sharpen our focus on the future we want to build. The devastation brought on by the scourge of AIDS in this country is not something we want to see repeated. This experience serves to propel us forward with greater determination towards the goal of ending AIDS as a public health threat and eliminating new infections.

Over the past two years, Eswatini rose to the moment as the HIV and COVID-19 pandemics collided, introduced additional instability, and increased the vulnerability of already vulnerable populations, putting them at greater risk of HIV acquisition. In the face of all this, the Eswatini HIV response remained resilient, continuing to embrace evidence-based tools, adapting, and innovating where needed to not only prevent backsliding, but also to make advances. Together, we quickly pivoted to reach populations in their communities and safely deliver ARVs and other needed services at a time when traveling to health facilities became an increasingly challenging option. We found ways to keep monitoring treatment efficacy and ensure that those taking treatment continue to suppress the virus to prevent onward transmission to others. While keeping the safety and wellbeing of healthcare workers and clients at the forefront, HIV testing continued and delivery of effective HIV prevention options like PrEP continued to scale.

This resiliency is demonstrated in the SHIMS3 results, and it comes with a deep understanding of what the costs are if we do not sustain the gains made and if we fail to close remaining gaps for all populations. There remain large groups of people at increased risk for newly acquiring HIV, and who continue to be challenging to reach.

Women bear the disproportionate burden of disease. New infections are occurring among women at a rate nearly seven times higher than among men, and young women remain particularly vulnerable. We now have new prevention tools such as Pre-exposure Prophylaxis, or “PrEP,” which have demonstrated efficacy. PrEP is a safe and effective medicine that can protect you from getting HIV from sex. We must both expand availability and empower our young people – and especially at-risk young women – to embrace this powerful prevention tool and protect themselves.

SHIMS3 also shows us that the largest gaps in our treatment and viral suppression coverage remains among men aged 25-34. I’d like to take this opportunity to remind everyone that antiretroviral therapy not only maintains health, but is also our most effective prevention intervention – those with an undetectable viral load will not transmit HIV to their sexual partners. Unless we find new ways to engage and mobilize young men to know their status and embrace treatment, our epidemic control goals will remain elusive, and continue to put others, including young women, at risk.

Taking a holistic approach in addressing persistent risk factors such as gender-based violence and social inequalities is important if we are to see our goals realized. Underlying social, economic, and gender inequalities – including gender-based violence – further entrench marginalized communities and can drive new infections. We must leverage the expertise and resources of all stakeholders, including youth and men, private sector, government, traditional and faith structures, and community organizations in partnership to reach the remaining 9% of adults living with HIV who are not yet on treatment. Then we must sustain the response. These are the same stakeholders who will play key roles in what we hope will be an inclusive, peaceful, and consequential national dialogue that will help Eswatini heal and move forward from last year’s civil unrest with a stable political system responsive to the needs and rights of all emaSwati.

We laud the Government of Eswatini’s ongoing investment in its HIV response and encourage renewed energy and leadership as we enter a new phase of the epidemic. The U.S. Government, through PEPFAR, looks forward to furthering our partnership to secure a future for all emaSwati that is free from the threat of HIV.

I thank you. Siyabonga.