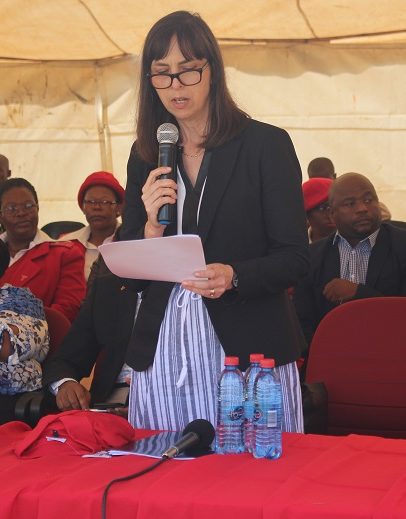 We are gathered once again to affirm our commitment to eliminating tuberculosis in Eswatini and around the world.  TB is the world’s deadliest infectious disease, with 10.4 million people becoming ill with active TB each year, and 1.7 million of those people losing their lives.  Beyond these people, there are two billion people who are infected with latent TB and who are at risk of developing active TB disease.  Of these two billion, as many as 67 million are children.

The theme for World TB Day this year is: It’s Time. It’s time to end TB – in children, in people living with HIV – in everyone.  We have the means now to break the cycle of transmission by using TB Preventive Treatment, or TPT, to treat latent TB.

At the U.S. Mission, we have invested over a half billion PEPFAR dollars in Eswatini since 2004.  While PEPFAR speaks specifically to “AIDS Relief,” TB control is a critical element of the fight against HIV and AIDS.  Among people who have TB, there is a 69 percent coinfection rate with HIV.  In recent years, we have seen encouraging declines in the numbers of people with active TB disease in Eswatini thanks to the widespread use of antiretroviral therapy to treat HIV.  Even with this progress, our focus remains to help strengthen Eswatini’s national response to TB through targeted prevention and treatment.

We recognize that controlling and eradicating TB requires strong partnerships. And we are grateful for the steadfast support of our implementing partners and stakeholders in this fight. Here in Eswatini, our small-but-mighty PEPFAR team – comprised of personnel from the Centers for Disease Control, USAID, Peace Corps, and the U.S. Department of Defense –  engages with national, regional, and community partners to support coordinated TB interventions. At ground level, they are improving facilities and infrastructure to prevent and treat TB, and strengthening the National TB Control Program’s capacity for planning, coordinating, and monitoring activities. According to 2017 World Health Organization figures, 3,544 TB patients in Eswatini were started on TB treatment. This represents 80% of the estimated number of people who had TB in 2017. Eswatini also demonstrated good collaboration between the HIV and TB programs, with 94% of TB patients knowing their HIV status and 95% of TB/HIV co-infected patients on ART.

There is, nevertheless, room for improvement in TB preventive interventions, especially among people living with HIV. TB Preventive Therapy (TPT) has been shown to reduce long-term TB mortality by 37 percent. This country has the right policies in place, the medicines to provide TPT, and the mechanisms to find people with latent TB.  And yet, Eswatini has given TPT to only 1 percent of newly diagnosed people living with HIV, according to WHO. We can improve this figure, but this requires real commitment from all stakeholders and the availability of more treatment options for patients, including new effective treatment regimens that can also serve as prevention. It’s time to treat latent TB!

On testing, through the CDC-supported Laboratory Cooperative Agreement, PEPFAR is assisting Eswatini in improving TB diagnostic technologies by adopting more sensitive TB testing platforms.  We are also helping to roll out point-of-care urine-based diagnostics for people living with HIV to ensure early detection and rapid TB treatment initiation. Through PEPFAR support, the Eswatini TB Reference Laboratory is on track to receive accreditation by the International Organization for Standardization (ISO), and auditors are in the country this week for the final accreditation process.

On treatment, we and our partners have continued to expand access to new drugs that treat multi-drug resistant TB, with 400 patients put on treatment to date. The U.S. Government congratulates Eswatini for successfully completing data collection for the TB prevalence survey, which will inform future interventions. With new information, we can better understand the prevalence of drug-resistant TB and chart a plan of action to address it. Taken together, these actions are making a difference in people’s lives – and we again commend everyone who has committed themselves, in ways both large and small, to the fight against TB.

Our successes, however, do not blind us to the challenges still left to overcome. If anything, those achievements keep driving us to show up and work hard each day. We are still witnessing high mortality rates, up to 24 percent, among people infected with drug-resistant TB. This poses a new set of problems as we strive to reach our 95-95-95 goals in the fight against HIV.  We cannot truly achieve success without vigilant surveillance and action among health care providers. It’s time we strengthen TB education and awareness among health care providers.

There is still more work to be done in decentralizing TB basic management facilities to correspond with facilities providing antiretroviral therapy. Proper connections between these two streams can improve early detection of TB and get people on treatment right away.

Finally, it’s time we focus on preventing and treating TB in children).  In Eswatini, up to 10 percent of active TB disease cases may be among children. We need to attack this disease before it attacks the country’s future. Let us trace, screen and appropriately treat children who have contacts with TB patients.

If we are to end the TB epidemic in our lifetime, we all need to strengthen our efforts to find and treat TB disease.  The investments in people, infrastructure, and resources made today, especially through PEPFAR and our partners, are critical to reinforcing these efforts.  But just improving our performance on finding and treating active cases is not enough.  We need to significantly scale up TPT to prevent future cases and break the cycle of transmission.  We have the tools. It’s time to use them.