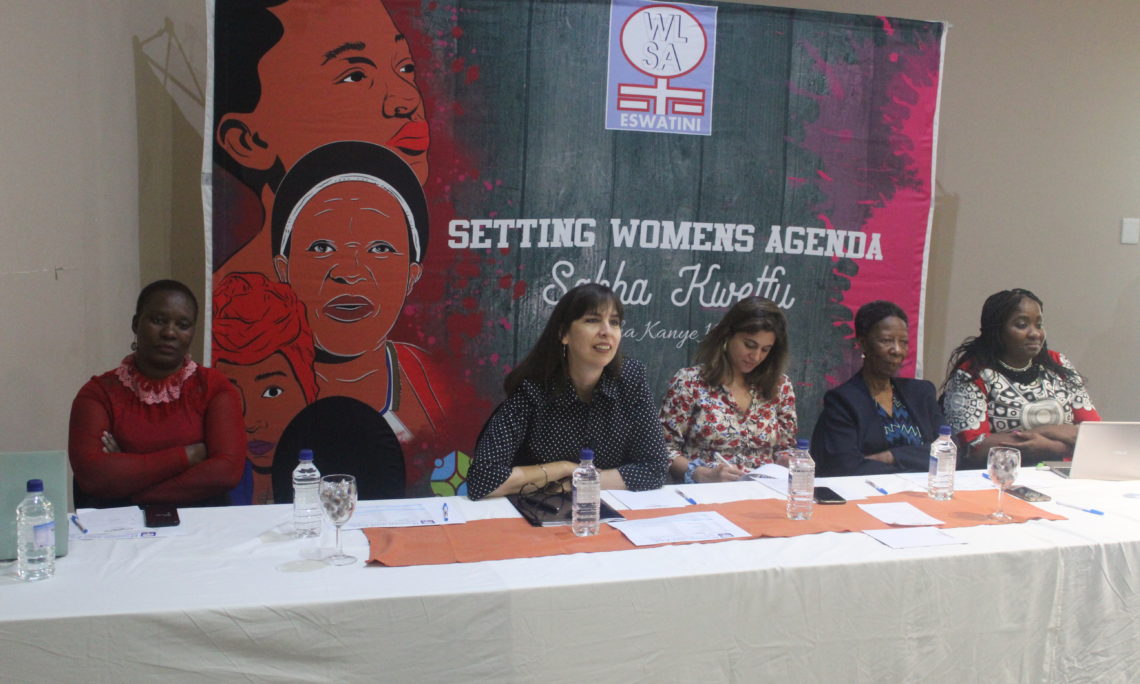 I am honored to join you for this training of women in leadership.  We tend to think of leadership as an individual quality.  If I asked you who leads my country, I suspect you would think only of my country’s president.  But my country, like many other countries around the world, is actually led by a carefully designed balance between the presidency, the legislature, and the courts.  Social justice movements also often have one or two leaders who stand out, but the success of advocacy campaigns depends on everyone in the movement playing their part to ensure the milestones are met on the way to an overarching goal.  WLSA and Liphimbo Labomake have recognized this balance and framed this leadership training within the concept of promoting collective advocacy and collaborations.

Women’s organizations of Eswatini find themselves in a period that is difficult for all movements.  You spent a decade focused on a clear and precise goal – passage of the Sexual Offenses and Domestic Violence Act.  I have noted before that passage of this Act was not just a victory in the fight against gender-based violence, but also a victory for civic activism in Eswatini.  Organizations with different mandates and strengths, and even sometimes competing funding applications, joined forces to advocate in a space where each of their mandates intersected.  They agreed on a common goal and consulted frequently to determine coordinated next steps in response to each new development around the draft law.  They drew on their different mandates to reach different constituencies, identified allies and people who could be persuaded to become allies, used these alliances to educate and lobby lawmakers and traditional leaders, showed up in Parliament at key moments, and held periodic marches to raise public awareness at appropriate strategic moments.  You must never forget how you achieved this momentous victory.

The hard part now is the question: what next?  With a massive goal achieved, members and supporters may be less energized.  Some may even ask why your organizations still need to exist.  And even though you’ve achieved victory with passage of the Act, people who are uncomfortable with the change this law brings will find ways to undermine it, whether by proposing new parliamentary action or simply trivializing assaults in media coverage.  So how do you fight off challenges to your last victory while moving on to the next level of success?

The first step is to define the next change you want to see.  While this leadership training is not about setting the next goal of the women’s movement in Eswatini, I urge you all to keep this thought in the back of your mind while you are here.  Is there another law that needs to be the focus of your advocacy?  Do you need more tools for carrying forward public interest litigation?  Do you need to start now on advocacy around candidates for the next elections?  Or perhaps you want to work on ways of getting more women into their own businesses, or into decision-making positions in large enterprises.  None of these are easy topics to successfully address, but if you properly define your goal, you can achieve any of these objectives.

There are a few other critical steps you need to consider for success, including expanding your network of allies and finding positive ways to attract supporters to your cause.  But I want to skip to the step that seems particularly relevant to where you find yourselves today, which is to build a plan to survive victory.  This may seem counter-intuitive, but simply passing a law doesn’t change the attitudes and beliefs that made the law necessary in the first place.  Such cultural and social change is not easy, but it is absolutely necessary, and with the right alliances and tactics, it can be achieved.

Advocacy around women’s rights in the U.S. is described in three waves.  The first wave lasted more than 70 years, from the women’s rights convention at Seneca Falls to granting women the right to vote.  The next wave didn’t start until about 40 years after that, when women moved into advocacy around employment opportunities for women and removing both legal and hidden obstacles to equal treatment for men and women.  One example of the activism during this era happened at the U.S. Department of State where, until 1971, female Foreign Service Officers like me were required to resign when they got married.  This was not a requirement driven by law.  It was simply custom within the Department, but one that had consistently been upheld.  When a woman defied the custom and remained in her job after marriage, she soon found that her stance was unsustainable when she became pregnant because there were no provisions for maternity leave.

We are currently living in the third wave of women’s rights advocacy, which started in the 1990s partly in response to a backlash against progress.  The current movement is striving for greater diversity, recognizing that there are a wide array of women’s experiences driven by everything from race to sexual orientation to socio-economic status.

Think for a moment about the timelines I just sketched out.  There was a gap of multiple decades between the first wave and the second.  I owe a tremendous debt to the many women and their allies who pushed for more than seven decades to obtain the right to vote.  But the long gap between gaining the vote and pushing for broader changes makes me suspect that the suffragists did not have a plan to survive their victory.  The challenge for you is to learn from their history and figure out now how you consolidate your gains of the past decade.  While you are doing that, you need to figure out your next goal and the steps you have to take to get to that goal.  Remember that small, achievable, and well-defined goals can build the road that gets you to your big overarching goal.  I can’t wait to see what you do next.