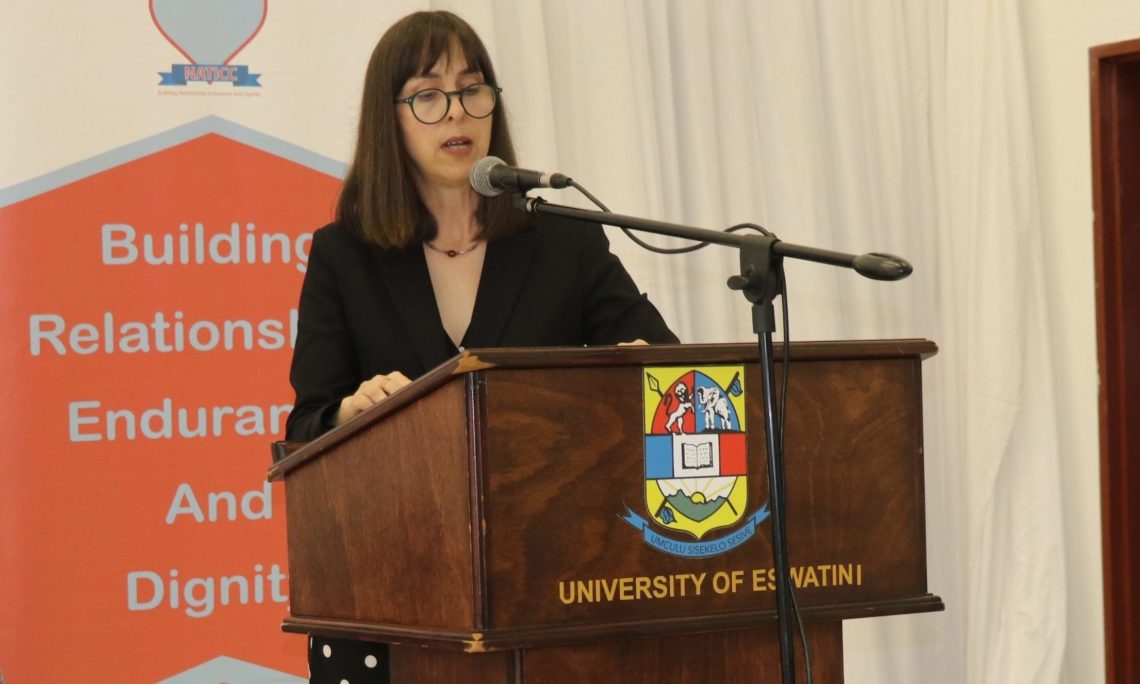 Executive Director and Members of the Nhlangano AIDS Training and Counseling Center,
Head of Department and Faculty of the Department of Sociology and Social Work,
Members of the UNESWA Association of Social Work Students,
Distinguished Guests,
Ladies and Gentlemen,

The campaign marking 16 Days of Activism Against Gender-Based Violence, which starts on the International Day for the Elimination of Violence Against Women and ends on Human Rights Day, galvanizes action to end sexual and gender-based violence around the world.   Each year, efforts by Swati organizations to commemorate this period grow in both number and scope.  This seminar is an example of how these efforts are increasing.

I would like to commend and thank the University of Eswatini, especially the UNESWA Association of Social Work Students, and the Nhlangano AIDS Training and Counseling Center (NATICC) for partnering in the fight against violence and hosting this very important seminar.

The theme for this year’s 16 days of activism campaign is “End Gender-Based Violence in the World of Work.”  Sadly, women may have no more safety in the workplace than they do at home.  Intimate partner violence, stalking, assault, rape, and harassment happen in the workplace every day around the world.  This has an impact not only on the victims, but also on employers.  Survivors of domestic violence are likely to have higher rates of absenteeism due to health problems and legal cases directly related to violence.  Clearly, our efforts against gender-based violence cannot stop at the edge of the family compound or homestead.  We need to reach into all areas where gender-based violence occurs and push for systemic change and accountability.  It is fitting, therefore, that we are here, at an institution that is itself a place of work, but also an entity preparing people for the world of work.

The newspaper headlines remind us of the prevalence of gender-based almost every day.  According to UNICEF, one in three females has experienced sexual abuse by age 18.  Forty-eight percent of Swati women report having experienced some form of sexual violence in their lifetime.  This violence has contributed to high rates of new HIV infections among young women, who generally lack the tools to defend themselves from unwanted sexual advances.  Much of this violence occurs in the home, where, too often, husbands mistreat wives and older relatives prey on young girls.  But we also hear stories of women who have to deal with their bosses exposing their private parts to them, textile workers being harassed for sexual favors, or domestic workers being sexually assaulted by their employers.  And let’s not forget that the public transport system is a gauntlet of both physical and verbal harassment.  How productive do you think a woman is going to be at work if she’s had to start her day with a khombi conductor or fellow passenger putting his hands wherever he wants?

Even as we deal with depressing every day events and statistics, we have to recognize that the past year has been one of positive developments in Eswatini.  In October last year, civil society groups showed incredible organizational effectiveness by flooding the gallery of the House of Assembly in the final days of debate on the Sexual Offenses and Domestic Violence (SODV) Bill, successfully persuading MPs to withdraw objections and pass the Bill.  From there, these groups set to work convincing members of the Senate.  They mounted a concerted campaign using personal contact, advocacy through the media, and public marches when appropriate, to build support for the Bill and respond to people’s concerns.

One of the groups worked with rural communities, educating women and collaborating with Lutsango LwaboMake and other community leaders on the Bill.  Another ensured that dialogue about the Bill was sustained and ongoing, informing a wide cross-section of the kingdom of efforts to pass the Bill. A third group focused on male mentoring, engaging men to educate and mobilize other men, including college students, about the Bill’s contents and how to hold officials accountable.

Collectively, these groups and others compelled Parliament to take action to protect emaSwati from gender-based violence. In July this year, after Parliament completed its action, King Mswati III provided royal assent to the SODV Act.

The action around the SODV Act shows that progress is possible when policy makers, legislators, service providers, and civil society work together in a comprehensive way.  The enactment of the SODV marked the end of more than a decade of activism to overcome opposition from government and traditional structures around the legislation.  The passage of the Bill was a victory not only for victims of gender-based violence, but also for civil society’s ability to effectively advocate for change.

Even as we celebrate passage of the SODV Act, real victory is only possible when the Act is actually used to bring perpetrators of violence to justice.  The good news is that magistrates and prosecutors have swung into action, moving quickly to use this law, to such an extent that they’ve been authorized to work on weekends to address the large number of cases.  Our Embassy is talking with NGOs and other key stakeholders on the next steps to take following the passing of the SODV Act. One critical step will be educating the Swati public and law enforcement officers about the contents of the law.

It is also important for university students to understand how the Act can protect them.  The same kinds of abuse that happen in home or the workplace also occur on campus.  And for those of you who are looking to make a career in social work, it will be imperative for you to understand the law and the role you have to play in ensuring the safety of victims.

Last week, I attended the One Billion Rising launch hosted by Women and Law in Southern Africa. The theme of the campaign this year is “Rising: from a campaign to a way of life.”  It’s important that we all take this theme to heart.  A campaign week is important for highlighting an issue, but we cannot pay attention to the issue only during the campaign period.  We also can’t pay attention only to cases that grab headlines.  We have to look at the foundations of gender-based violence – attitudes and beliefs about women or LGBT people that make it culturally acceptable to demean other people and treat them as less valuable or as mere sexual objects.  These attitudes are the starting point that can end in acts of physical violence, and they also put women and LGBT people at a disadvantage in the economic, political, socio-cultural, environmental and ideological spheres.  If we are truly going to eliminate gender-based violence, we need to address these roots of inequality and disadvantage.

And so what is your role – as social work practitioners and as students who want to engage actively on these issues?  Certainly a seminar like this is an important step.  Students can help break the cycle of violence.  You will need the tools to know how to ensure justice when an act of violence has occurred.  Justice and accountability for crimes now will be part of what prevents them in the future.   You must know your rights; act against abuse; and please don’t look away.  If you become aware of an abusive situation, support the person who is suffering the abuse.  And if you yourself are experiencing abuse, find the tools to hold your abuser accountable.  In my own experience with sexual harassment – which happened in a university setting – I took the step of talking to the office responsible for handling such cases, but ultimately did not file a formal complaint because I feared retaliation from my boss.  Thirty years later, my university became an example in the #MeToo movement over charges of sexual harassment.  If I had overcome my fears 30 years ago, maybe the campus culture at my university would have started changing sooner, and other women would not have been subjected to the same humiliation I and other women experienced.

The conversation you have started as a seminar this year must be sustained.  The dialogue must include both women and men and must help individuals build up their own self-esteem so that they can learn to defend their rights and demand respect for others.  We should all want respect for each other to be a way of life in Eswatini, in the United States, and in our wider world.

Thank you for inviting me to join you today as you embark on this important mission to end gender-based violence in our homes, on our campuses, and in our places of work.  The time for change is now.  We at the U.S. Embassy value your efforts and wish you all success as you move forward.