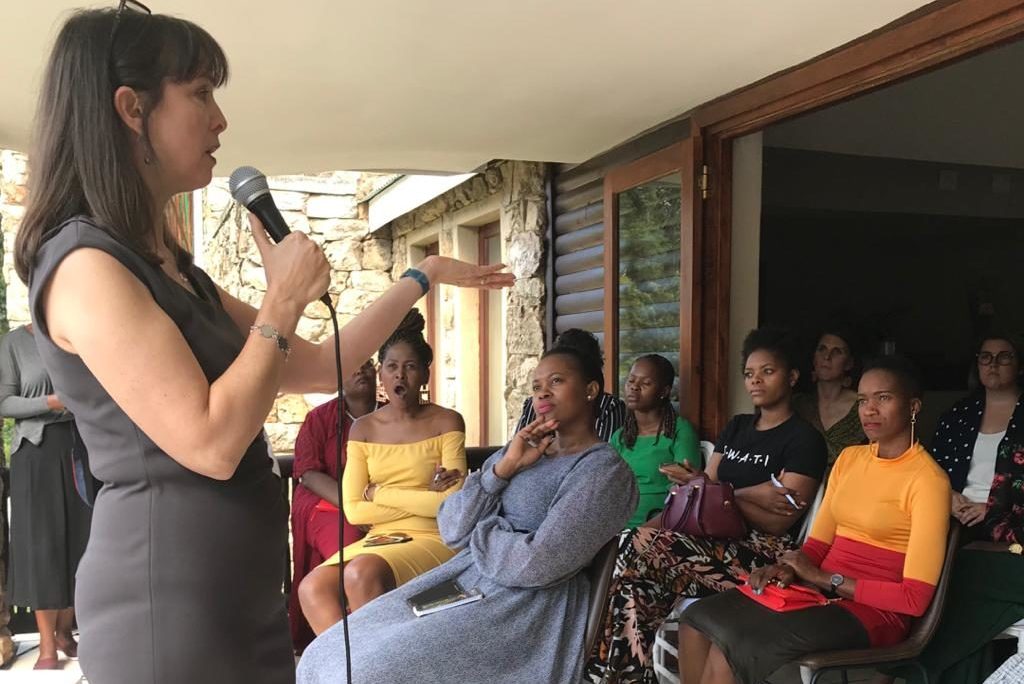 It is an honor to be here today, and to be surrounded by so many smart, dedicated women who are changing the landscape of leadership in this country.  Everyone in this room is fighting for the voice of women in Eswatini and demonstrating extraordinary courage and leadership in your communities every day.  I want to thank the organizers for crafting this seminar, and I particularly want to recognize the manner in which you have recognized every level of effort that is necessary to make an event like today’s successful.

The Women Working Together Team includes at least one esteemed volunteer.  As societies, we too often overlook the work performed by people who are not paid.  But this work is often the connective tissue that makes everything else run the way it should.  Think about the work performed by women running their households, then think about how much they are paid for this work that feeds, clothes, shelters, and educates others.  These are all volunteers, but too often, they are not esteemed.  We need to change that, and change starts with activities like this one that explicitly recognize the critical role played by all esteemed members of the team.

March is Women’s History Month, a time to reflect on and honor the countless examples of fearless women who have preceded us all in the fight for the human rights of women, and who have paved the way for our continued advancement.  In the United States, we may trace the DNA of advocacy for women’s equal participation back to Abigail Adams, the wife of my country’s second president.  In March of 1776, as the country was moving toward independence and crafting laws to reflect a new political order, she wrote her husband a letter urging him to “remember the ladies”.  She went on to say:  “Remember, all men would be tyrants if they could. If particular care and attention is not paid to the ladies, we are determined to foment a rebellion, and will not hold ourselves bound by any laws in which we have no voice or representation.”

It took more than 70 years for that rebellion to begin, when Elizabeth Cady Stanton penned the Declaration of Sentiments stating that all men and women are created equal.  More than 70 years after that simple but revolutionary statement, women in the United States successfully claimed their right to vote.  100 years after that constitutional achievement, less than one quarter of our national elected officials are women.  You might be tempted to think that we still are not doing enough to “remember the ladies,” but stellar individuals from Sojourner Truth and Susan B. Anthony to Rosa Parks and Eleanor Roosevelt were key forces in ensuring that the moral arc of history continues to bend toward justice.

Across Africa, there are similar challenges in giving women a voice in the policy and legal processes that affect them.  You all have lived the struggle of trying to get more women into all levels of elected office.  Nevertheless, there are women across the continent who have enabled young women to see role models and aspire to carry the human rights of women to the next level.  Kenyan Nobel laureate Wangari Maathai showed us how human rights and the environment are inextricably linked, and how sustained civic activism in the face of powerful opposition can ultimately bring progress. Ellen Johnson Sirleaf, also a Nobel Prize winner, was Africa’s first woman to be elected president and led her country out of the devastation caused by civil war.  In Eswatini, you have in your midst women such as Bishop Ellinah Wamukoya and Judge Qinisile Mabuza who are breaking glass ceilings and serving as role models for young women beyond this country’s borders.

Today, in Eswatini, we celebrate you—heroes of your communities and leaders whose examples are no less inspiring.  Everyone here is working to break down barriers to women’s political participation, counter negative gender stereotypes, chip away at social norms that block women from participating in the economy across a huge range of sectors, and learn how to mentor the next generation of Swati women leaders who will follow in this charge.

We are also here today to talk about current challenges faced by women leaders in Eswatini. We all know this country is faced with a critical fiscal crisis and that the country loses 50% of its potential by not harnessing the power of women.  We must recognize the potential of women and the role they can play in economic recovery and growth and we, as women leaders, must be prepared to step up and meet that challenge.

Unfortunately, other more subtle barriers also exist that block women’s ability to secure the same rights and opportunities as men in Eswatini.  One major example is access to justice.  Throughout the world, people with limited financial resources have the greatest difficulty getting justice because of the cost of legal support.  Because women often have fewer economic opportunities, they can be overly represented in this population of people who simply can’t access justice.  Here in Eswatini, there has been great interest in a legal aid bill, which should be a way to open up legal support to those at the lowest end of the economic spectrum.  This would be a laudable step towards expanding access to justice.  Still, if the country does not also address strict limitations on who is permitted to represent clients in court, the proposed legal aid bill might offer a dream of representation without opening the pathway to make that dream a reality.

Other countries have found ways to address this problem without undermining the economic model of private legal practice.  Eswatini needs to find a similar solution so that all people have a chance to be heard by a neutral arbiter. Such a change could benefit everyone who currently cannot have their day in court, from the man trying to retain his claim to a piece of land to a woman seeking protection from a violent partner.  This is an issue that needs creative thinking and persistent advocacy.

Fortunately, both of these elements are strongly represented in this room today.  Women such as yourselves are in a position to make a difference.  You are the change agents in Eswatini today, and with a clear vision, persistence, and determination, you can work together to make your voices heard.  An issue such as access to justice cuts across multiple sectors and is an area ripe for strategic alliances.  If you feel like access to justice is not an area that speaks to your particular skill set, there are certainly numerous other challenges that are waiting for your energy and your problem-solving skills.

Wherever you choose to target your energies, it will be critical to encourage and bolster the confidence of others to join your cause.  Be a mentor.  Find and develop new abilities in the next generation and guide them through the different steps they will take in life.  This ignites the flames of hope and possibility.  There is “magic” in a mentoring connection. Some aspects of mentoring are unspoken, so values, attitudes, and hopes are shifted all through the relationship.  Mentors help fill knowledge gaps and help the next generation grow and excel.  As a mentor, you have to lead by example, be resourceful, give advice, listen, and provide guidance and constructive feedback.  Helping someone else succeed can be immensely gratifying.  And if you’re doing it right, mentoring can help you grow as well.

We all need to constantly grow and adapt our leadership styles to the situation at hand.  This can sometimes be particularly challenging for women, because our leadership styles may be different from what has been the accepted model of successful leadership.  Some suggest that this may be an inherent trait of women, but I suspect it is more a factor of the skills and strategies we have had to develop both in the nature of work that the world thought was appropriate for us and in learning to leverage different strengths to achieve results in a system that did not want to let us in.  While we need to learn how to strategically deploy the tactics that have driven men’s success for generations, we also need to hold onto the approaches we use that may be different, but are no less valuable, because our experiences are helping to re-shape the world in ways we probably don’t even realize.

From the days of the resolute Queen Labotsibeni to the present, Swati women have worked tirelessly to shape the economy and society of the country in all spheres.  From running their homes while their husbands travelled long distances in search of employment, to influencing policies and shaking foundations, Swati women’s heroism is apparent all around us, in many forms.  I applaud Swati women politicians, innovative women in science and technology, women leaders in business, women in sports, women educators and the many other exceptional women around us.

I also want to urge everyone to support the empowerment of other women leaders and be the voice that speaks for gender equity in our society.  By highlighting the achievements of established women leaders and advocates, and by mentoring a new generation of Swati women leaders, we support one another and build on our individual and collective achievements.  This is how we encourage more women to have the courage to take on leadership roles, and this is the goal we all share.

Finally, to all the women leaders who are here today, we celebrate you today and always.  You represent your communities and yourselves with distinction and honor, and you deserve a round of applause for your contributions to the community and the future of Eswatini.