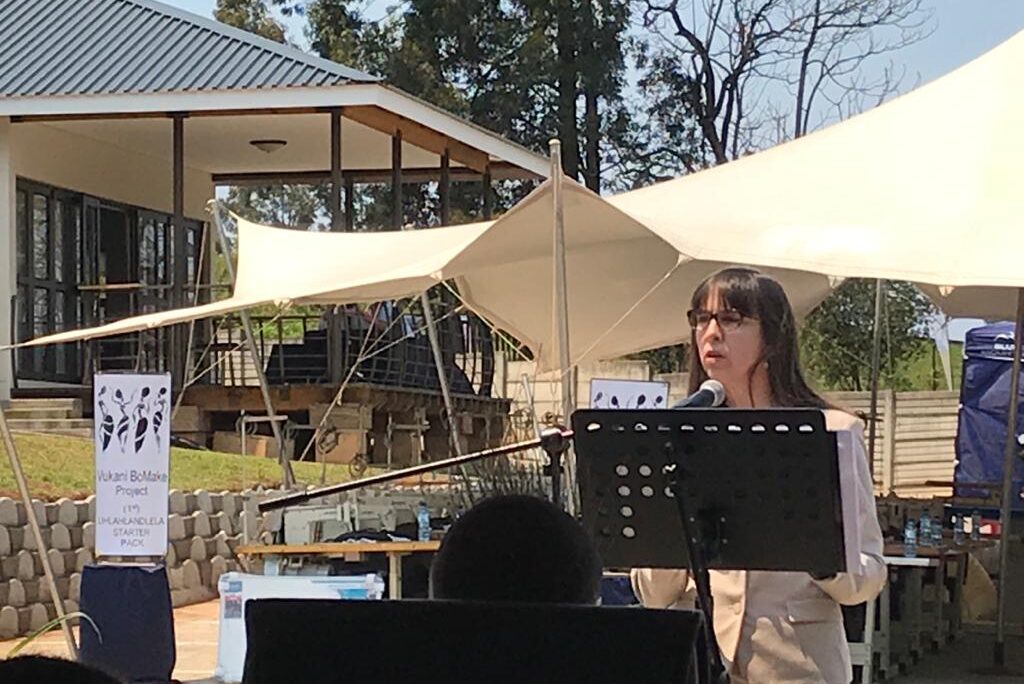 Thank you for inviting me to join you in this celebration of rural women and creative entrepreneurship. The best practices required to minimize the spread of COVID-19 – face coverings, hand sanitation, and social distancing – have forced us all to find new ways to go about our business. Vukani Bomake seized this as an opportunity to turn a long-standing business model on its head, creating an approach with the potential to revolutionize a critical industry in Eswatini.

Vukani Bomake grew out of the need to pivot during a crisis, but its impact will likely last well beyond the time when our lives start to look somewhat similar to what they were before COVID-19. The pandemic is a global tragedy, but within that tragedy lies the opportunity to examine old practices and create something that embraces strengths and overcomes obstacles. When it was not desirable to have large numbers of women working in enclosed factory settings, Vukani Bomake found a way to take the workplace closer to women’s homes. Women who are able to remain in their home areas are more likely to use their earnings closer to that home area, which should support economic growth outside the Manzini-Mbabane corridor. Being able to stay in their home area means that women are better positioned to take care of their families. And when women are not drawn into living in crowded communities for the sake of work, they can develop stronger defences against the vulnerabilities that lead to gender-based violence, HIV infection, and unintended pregnancies.

As people think about other sectors that may be able to use this model – particularly agri-business – they will need to think about some of the deeper structural factors that place women on an unequal footing with men. There are a number of elements that create disparities in access to income and productive resources. One such element is land. Women control much of the process of producing food, but in many instances lack security of land tenure. Limits on property ownership and discrimination against women hoping to claim and maintain land rights create immediate and ongoing disadvantages. These disadvantages do not affect just a woman and her family. They can hold back whole communities. When a woman is responsible for feeding, sheltering, clothing, and educating her family, what do you think happens to these needs if her land is taken from her? Allowing a woman to be disadvantaged means you automatically place her children at a disadvantage, limiting their future prospects and setting them up to pass on this disadvantage to their own children. Such lack of security – in countries throughout the world – means that people may not invest as much in the development of their land, which in turn means that they are not producing to their full potential. And if individual families struggle with disadvantage from generation to generation, then their communities also fall short of achieving their full potential.

Women in Eswatini have historically been disadvantaged in the allocation of land because culture has traditionally connected land ownership with men. The majority of people responsible for determining who is able to hold customary land tenure are men. There are some chiefs now who are forward-leaning in granting women plots of land, but their equitable stances do not seem to be widely known or emulated. I was recently told that women are simply not seeking to kukhonta because they don’t believe they can. I suspect there is a bit of truth to this, because once a belief is firmly rooted in a group, it can be hard to trust that reality may have moved on to a more favourable place. In the end, whether it is reality or perception, the effect is the same. We need to work toward removing both real and perceived obstacles.

Just as there are some forward-leaning chiefs, there have been landmark court rulings regarding women’s ability to own title deed land in their own names, but similar delays in understanding how laws or practices have changed means that women are still nearly 1,000 parcels behind their male counterparts.

There is clearly a need for education and advocacy around access to property and security of land tenure. As initiatives like Vukani Bomake move into chiefdoms eager to see such developmental benefits, education can happen somewhat organically. Advocacy can be part of that local level education, but there are also actions that need to happen through national level institutions, and they require persistent engagement. While I am framing remarks on International Rural Women’s Day around women’s access to land, advocacy and legal representation will help both women and men with security of land tenure. Ratification of the Land Policy, improvement of dispute resolution mechanisms, and formalizing property rights on Swazi Nation Land to increase equitable access by households will create a firmer foundation for economic development. Effective and accessible legal representation will be critical to helping people work through some of these areas of concern.

You might be asking yourself why the issue of women’s access to productive resources, including land, is important to the U.S. Government. When you think of the U.S. Embassy, the first thing you probably think of is PEPFAR and the billions of emalangeni we have invested in our partnership with Eswatini to fight HIV and AIDS. That fight, however, cannot take place in the health space alone. Increasing women’s access to income and productive resources leads to better health outcomes, greater food security, and improved overall living standards of entire households. If we are not paying attention to issues around access to income and land, we cannot achieve sustained success in the fight against HIV.

A decade ago, the Deputy Prime Minister opened the forward to the National Gender Policy with the statement: “The Government of Swaziland has recognized the need to ensure equitable and full participation of women and men at all levels of development.” While there are still many challenges, there has been notable progress in building toward such equitable and full participation. The Vukani Bomake project is a fantastic example of the creative problem solving and practical drive that women can bring to overcoming challenges. These kinds of ventures can have tremendous impact and should be continuously encouraged. I hope that government and business will see the value that women can add in this regard and will proactively work to bring more women to the tables where development and recovery plans are being made. Doing so will lift everyone across Swati society.