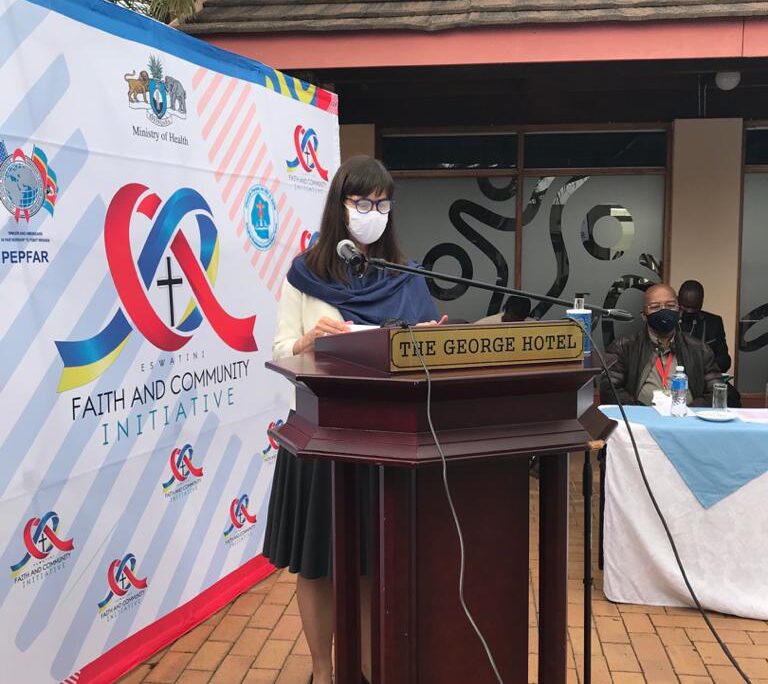 I am honored to stand here with you today to help launch the Faith and Communities Initiative—an innovative concept that is empowering and investing in people and institutions to help achieve HIV epidemic control in the Kingdom of Eswatini. The timing of this collaboration is particularly relevant as it comes at a moment when we are all faced with the unprecedented challenges of the COVID-19 pandemic and when countries like Eswatini face the dual challenge of overcoming COVID-19 while also striving to maintain their gains in the fight against HIV.

For the Faith and Communities Initiative, Eswatini is receiving an additional E150 million over two years, on top of its annual PEPFAR program funds of more than E1 billion, to equip and capacitate faith and community structures as a part of PEPFAR’s many-layered approach to combat HIV/AIDS.

This approach makes particular sense in Eswatini, and it is an affirmation of the work you are already doing. Eswatini was one of 10 pilot countries selected to receive this support, and it was chosen in large part because the faith community has been supporting differently abled and sick people in their communities for many years. Eswatini also has strong existing faith structures that have been coordinating an HIV/AIDS response, driven by the Eswatini Church Forum, for years. In Eswatini, 70 percent of the population lives in rural areas, so it is vital that we work hand-in-hand with local faith leaders to empower their communities to develop and carry out their own plans for providing health services. Faith leaders are also trusted and respected as an integral part of Swati communities, so they are particularly well placed to help provide HIV testing services, carry new messages of hope, reduce HIV-related stigma, and address violence against children.

Eswatini stands on the brink of reaching epidemic control in the fight against HIV. However, many groups still lag behind in receiving HIV testing and services. Let me take a moment to focus on the problem of stigma. Although Eswatini has achieved notable success in its HIV response, there is still an alarmingly high percentage of men who are not aware of their HIV status. According to the Eswatini HIV Incidence Measurement Survey (SHIMS) (2017), 22.5% of men living with HIV do not know their status compared to 11.4% among females. Stigma and fear continue to stand in the way of men knowing their HIV status, seeking care and treatment, or returning to treatment. Stigma makes us less effective at preventing new infections. Men who fear a positive result and do not test for HIV, or who have HIV but experience barriers to treatment initiation, risk both their own lives and the lives of their sexual partners. The Faith and Community Initiative is a way to reach these men directly and offer support and encouragement to test and treat them, with the longer term aim of protecting their families and communities from infection. Joining hands with communities of faith to offer HIV information and testing to these men is a sensible and sustainable way to reach them and convince them to do their small part in the fight against HIV.

I would also note that, despite tremendous progress, the rates of new infections in Eswatini are still among the highest in the world. The 2019 UNAIDS HIV estimates for Eswatini indicate that over 7,000 people were infected in 2019, and more than 2,000 people died from AIDS-related causes. The numbers show that young women are still becoming infected with HIV at alarmingly high rates, at a rate that is much higher than the rest of the population. Until age 14, HIV infection rates among boys and girls are similar. After age 15, new infection rates for young women rise until, by age 24, a young woman is five times as likely as her male counterpart to be HIV positive. It is only after age 25 that men’s infection rates start to catch up with women’s. This is a dynamic that the faith and community initiative can help reverse by reaching adolescents and the young with testing, HIV prevention information, and linkage to treatment services in addition to other efforts. Faith leaders can also limit the risk of children and young women acquiring and transmitting HIV through their contribution to preventing sexual violence against children and gender-based violence.

The first goal of this partnership is to work with communities of faith to reach and test men, women, and HIV-positive children who do not yet know their HIV status. Faith leaders and community carers are then able to follow them, and link them to HIV prevention or HIV treatment services, as appropriate. As a part of this goal, the initiative has also developed HIV Messages of Hope to better inform people about the disease, and provide encouraging messages, such as: HIV is not a death sentence; people living with HIV can protect their families; and new treatments have fewer side effects. Messages will be shared that if someone tests positive, he or she should not delay starting HIV treatment until their health declines, but can, and should, start treatment immediately. This practice of “test and start” improves and protects the person’s health and contributes to them being less likely to transmit HIV once their viral load is suppressed.

These objectives can and will have a positive lasting impact on the quality of life for all Emaswati. Through this support, we hope to see:

o All people who test positive being linked to HIV treatment services and those who are negative linked to HIV prevention services;

o Those who are newly diagnosed and on treatment receiving support through faith and community structures to live positively and adhere to treatment;

o The eventual removal of barriers to prosecuting cases of sexual violence against children;

o An improved understanding among faith leaders, congregants, families and school children of the Children’s Protection and Welfare Act, the Sexual Offenses and Domestic Violence Act, and other protections from violence, using trainings and innovative educational and communications material such as comic books.

o Capacitated healthcare workers who have received training on proper documentation of, and response to, GBV.

This is all in addition to the work already being carried out by the Eswatini Government supported by PEPFAR. Through PEPFAR, the U.S. government has invested more than E8 billion in the Eswatini response. Through the PEPFAR program, the U.S. government stands with you as we move forward, wading through uncertain times including with the backdrop of a global pandemic. We remain committed to the continued success of these initiatives, supporting communities in Eswatini to reach an AIDS-free generation.

Finally, I want to say thank you to all the faith leaders and our implementing partners for your tireless work in support of this program and the people of Eswatini in preventing HIV and helping those with HIV to live long, productive lives. You are everyday heroes who make a difference in your communities, who advocate for and inspire others, and who make epidemic control possible. It is not an infection that defines us, but rather, it is our strength, courage and compassion to move forward and prosper in the face of adversity.