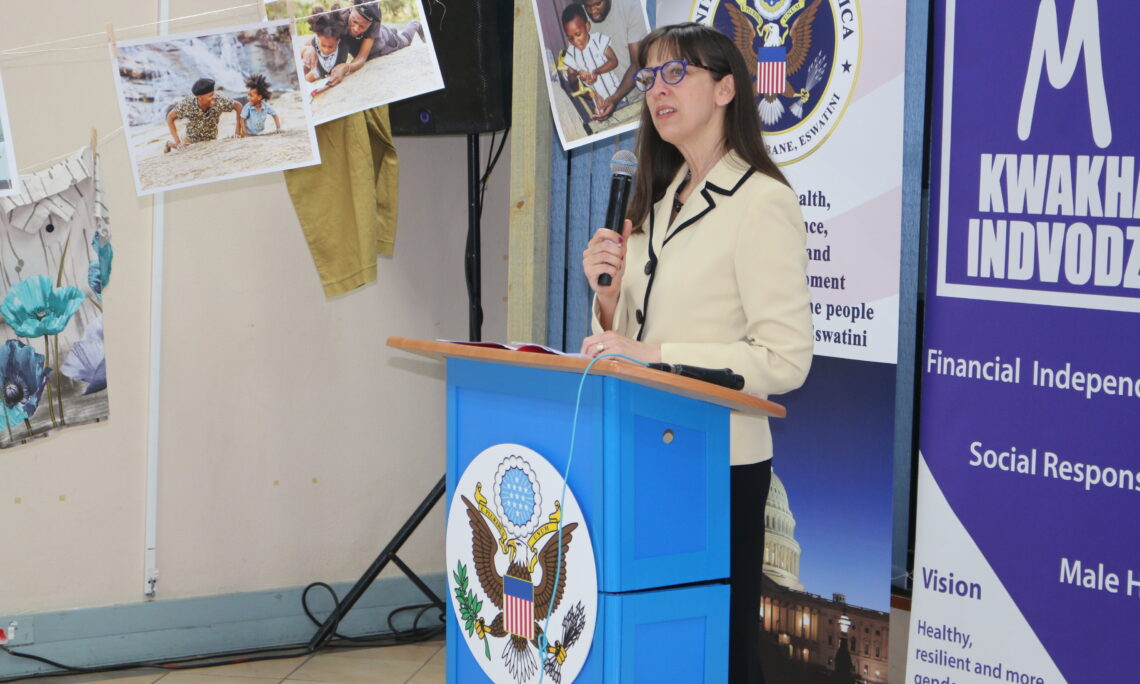 I am honored to join you this evening for an event celebrating fathers and fatherhood in the most vivid way possible. The photos surrounding us were captured during Kwakha Indvodza’s “Babe Locotfo” or Good Father project, and they are a beautiful and inspiring homage to the vital importance of engaged fathers.

This program connects with young fathers, celebrating them and educating them on the powerful role they play in the lives of their children and families. A present and involved father contributes to both improved life opportunities in the immediate family and to stronger community outcomes. Fathers can also be critical allies in the effort to advance gender equity in Eswatini.

Our work with Kwakha Indvodza and other organizations aims to address gender-based violence, empower women and girls, prevent sexual assault, and address the power imbalance that feeds cycles of abuse and violence. We know that gender-based violence is incredibly widespread, and it takes an enormous physical, psychological and economic toll. It is too often inflicted by intimate partners, friends or neighbors. To truly eliminate gender-based violence, we must change fundamental attitudes that perpetuate, rationalize, and normalize that violence.

It is generally easier to shape an attitude before it is fully formed than it is to change one that is already integrated into a person’s way of thinking and living. Encouraging young men and guiding them on how best to take an active caring role in the lives of their children, from the very beginning, is the aim of the Babe Locotfo campaign. The Good Father program is teaching young fathers about their role, reinforcing positive role models, and connecting them with a network of other young fathers learning these same skills. It seeks to build a generation that views violence as an unacceptable outlet because they have had the benefit of fathers who have been able to fully invest in and care for their children without using force.

Positive fatherhood is not just about combatting gender-based violence. Studies in the U.S. show that children who grow up in a home with a present, engaged father are more likely to succeed in school and higher education, more likely to go on to build stable relationships, and more likely to establish strong foundations for economic success. Families are balanced by positive male role models. Present fathers can break the cycle of abuse, be mentors and role models, lift families up, and drive prosperity in their communities.

Community prosperity has to mean the whole community, which means that long-standing practices around issues such as access to productive resources may need to be re-evaluated to be sure that everyone has the same opportunities. Security of land tenure is an issue of concern for many emaSwati, but it is especially so for women. Women in Eswatini have historically been disadvantaged in the allocation of land because culture has traditionally connected land ownership with men. The majority of people responsible for determining who is able to hold customary land tenure are men. There are some chiefs now who are forward-leaning in granting women plots of land, but these stances do not seem to be widely known or copied. Landmark court rulings have advanced women’s ability to own title deed land in their own names, but such advances are still not fully institutionalized. Fathers can play a critical role in ensuring that their daughters have the same access as their sons to such a crucial resource. Such a role may be as modest as defending a daughter’s right to kukhonta during conversations with friends or neighbors.

Investing in our children is investing in our families, our communities, our countries, and our world. Investing in our daughters will equalize an imbalance that has often favored the boy child around the world, and will open up new ways of thinking and working that come from the different experiences and perspectives of women. Activities such as Babe Locotfo help to build up men’s toolkits to invest in all their children by being present.

I want to thank Kwakha Indvodza for inviting me to celebrate the fathers in this room and the photos that surround us.

Congratulations to the winners of this photography contest, and to all the present fathers in this room. We celebrate you for the care, thought and diligence you put toward your children and the investment of time you are giving to the next generation.