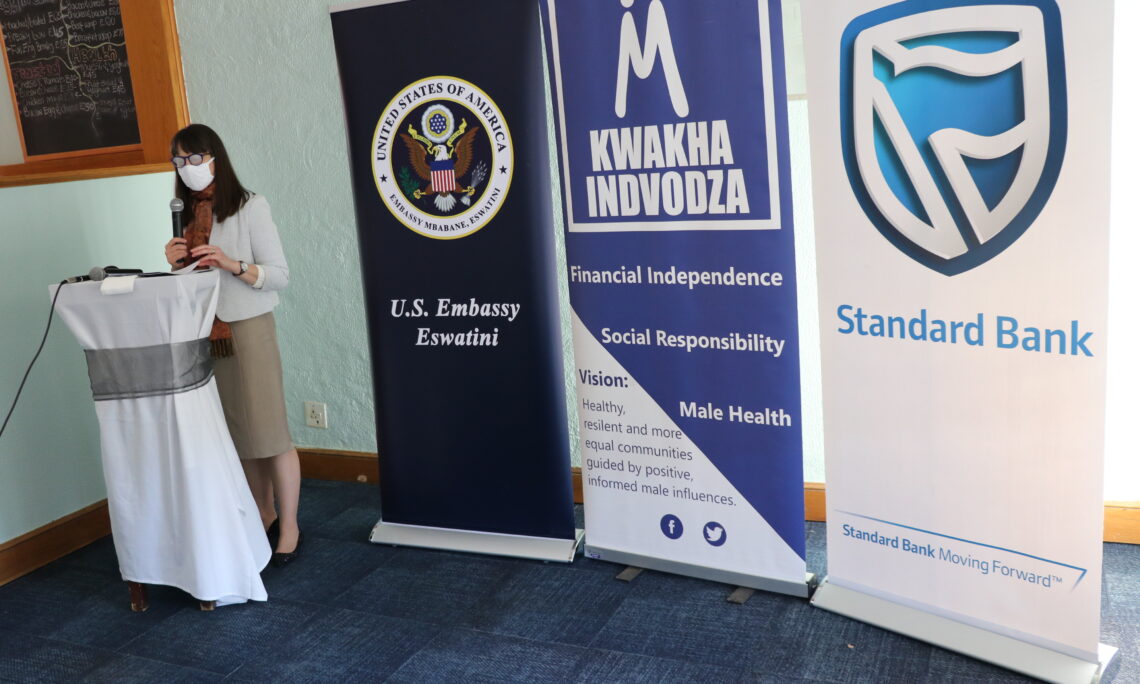 I am honored to join you here today for this event celebrating young people who have opened their hearts in this “Letter to my Father” essay contest. Tom says the essays he read for this contest were both heart-warming and heart breaking. Together they tell the story of fatherhood, whether from the perspective of a child enjoying love and positive influence, or a child keenly feeling a father’s absence.

The U.S. Embassy is pleased to support Kwakha Indvodza’s “Babe Locotfo” or Good Father campaign. Reaching young fathers and educating them on the powerful role they play in the lives of their children, their families, and their community is vitally important. A present and involved father contributes to both improved life opportunities in the immediate family and to stronger community outcomes.

Support to campaigns such as this one is part of my Embassy’s deep commitment to advancing gender equity in Eswatini. We work with Kwakha Indvodza and many other organizations to address gender-based violence, empower women and girls, prevent sexual assault, and address the power imbalance that feeds cycles of abuse and violence.

Gender-based violence is one of the most prevalent human rights abuses in the world. Newspaper stories frequently remind us that Eswatini is no exception. Studies highlight the lasting negative physical, psychological, and economic effects that violence can have on women and girls – and the families and communities around them – yet it continues to occur at an alarming rate and it is often inflicted by intimate partners, older relatives, and neighbors. As we all struggle to eliminate violence in our midst, a critical element of our strategies must be changing mindsets that rationalize and normalize violence.

It is generally easier to shape an attitude before it is fully formed than it is to change one that is fully integrated into a person’s way of thinking and living. One way to do this is to provide positive examples for young people to experience and emulate. It can help people to see the change they want to be. Encouraging men

and guiding them on how best to take an active caring role in the lives of their children, from the very beginning, is the aim of this KI campaign. It seeks to build a generation that views violence as an unacceptable outlet because they have had the benefit of fathers who have been able to fully invest in and care for their children without using force. Fathers have a tremendous role to play in being present, building stability, and eliminating violence against women and girls.

Positive fatherhood is not just about combatting gender-based violence. Studies in the U.S. have shown that young people who grow up with a present, engaged father are less likely to drop out of school or commit a crime. Young people with close relationships to father figures are less likely to have sex at a young age and tend to avoid other high-risk behaviors. They are also likely to get higher paying jobs when they become adults, and they are more likely to have healthy, stable relationships of their own. And so the virtuous cycle begins. Men are not just benefitting their own families by investing in involvement. Think about that data point about children being less likely to have sex at a young age and how that connects with concerns in this country about numbers of teen pregnancies. Think about the point on avoiding high-risk behaviors and how important that is in the fight against HIV and AIDS. Think about the point on more secure economic foundations and how important that is to this country’s growth and development.

When men are present and engaged in the lives of their children from day one, there are potential benefits for all of society around them.

I am so grateful that Kwakha Indvodza invited me to speak with you today. I am a huge fan of the incredibly important work they are doing. We all need to be constantly working on investing in the next generation wherever we may be in the world, and KI approaches this responsibility with tremendous thoughtfulness, creativity, and persistence.

Finally, congratulations to the winners of this amazing contest! I look forward to watching this campaign to continue to unfold.