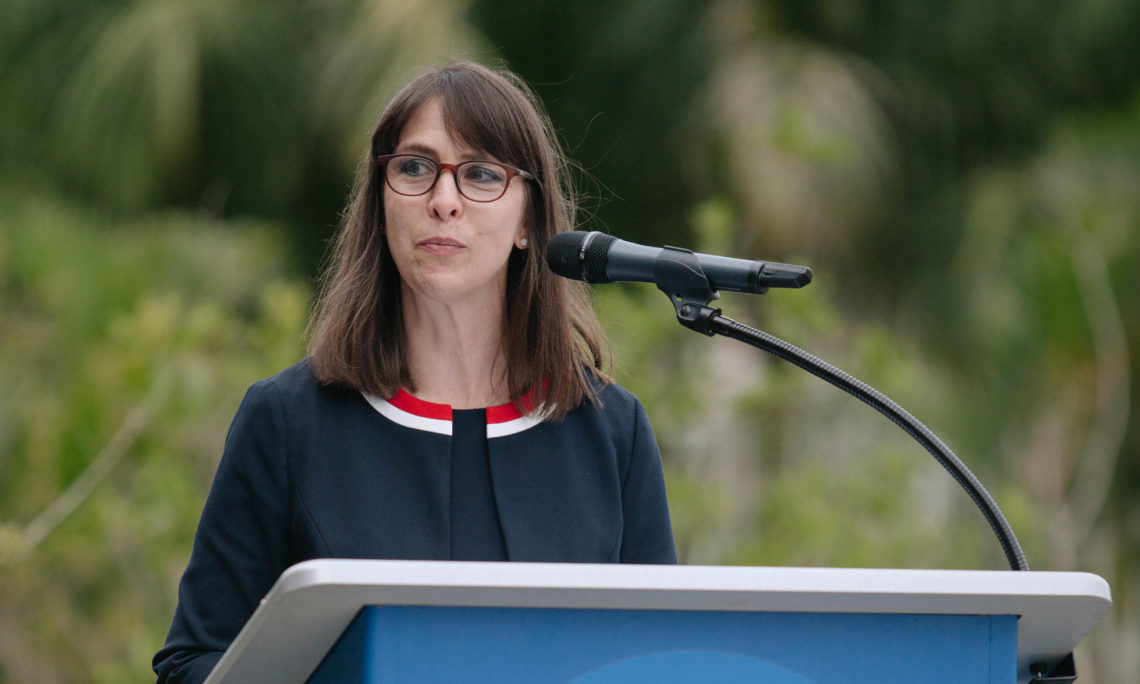 Thank you for joining us, once again, as we commemorate our nation’s Independence Day. In 243 years of independence, we have experienced a wide array of setbacks and advances.  Although our Declaration of Independence underscored the equality of human beings, more than 100 years would pass before this principle became enshrined in our Constitution.

Some of our darkest historical periods, including a devastating civil war, grew out of the failure to live into that ideal of human equality.

Some of our brightest moments came in the social justice movements that advocated for change and strengthened us as a nation, from anti-slavery and women’s suffrage to workers’ rights, civil rights, and the fight against HIV/AIDS.  These movements each had unique goals, but they were all motivated by that founding principle that all people are created equal and endowed with the rights to life, liberty, and the pursuit of happiness.  These movements changed laws, instituted policies, and shifted societal attitudes.  They also made citizen groups and governing officials better practitioners of democracy, and moved us further toward our constitutional ideal of a more perfect union.

The Swati constitution also holds an aspiration to guarantee the happiness and welfare of ALL emaSwati.  This aspiration was seriously challenged by the HIV/AIDS epidemic, which was particularly devastating for Eswatini.  This year marks our 15th year of partnership in the fight against HIV and AIDS.  In the past 15 years, we have invested more than one-half billion dollars – roughly seven billion emalangeni – to bring the epidemic under control.  Consider for a moment where this country was 15 years ago and where it is today.

At the height of the epidemic, I have been told that people were forced to choose which funeral they would attend on any given Saturday, because more than one friend or relative may have passed away.

Today, thanks to effective treatment and a range of prevention tools, Eswatini is a very different place.  When people get on treatment, they live.  They can live full and healthy lives.  Right now, roughly 86 percent of HIV positive people in Eswatini are on treatment.  Medications for treating HIV are constantly improving, and Eswatini has started a transition to new and more effective drugs.   We now have many more prevention choices, along with treatment and beyond the trusty traditional condom, from medical male circumcision to a daily prevention pill for people most at risk, that are highly effective at keeping people from contracting the virus or transmitting it to a partner.  Fifteen years ago, it was probably difficult to imagine that we could achieve the progress we have made together in approaching epidemic control.  But this progress did happen, not in a single revolutionary moment, but through hard work, persistence, and a multitude of small but significant victories.

This past weekend, LGBT groups and their allies held Eswatini’s second Pride parade.  The connection between Pride and our joint success in the fight against HIV may not be immediately obvious to all, but our success is rooted in the advocacy efforts of LGBT groups in the United States.  When the AIDS epidemic began, it took its heaviest toll on gay men in the U.S.

LGBT communities quickly learned that they had to take charge of their care in the face of discrimination and hostility from medical staff, employers, and even families.  They created organizations to provide health care services, developing care models that were ultimately adopted at the national level.  Attorneys provided volunteer legal services to people who had suffered evictions or lost their insurance because they were gay or HIV positive.

These service organizations grew into policy advocacy organizations, calling on public officials to respond robustly to the epidemic.  They lobbied for funding for research, prevention, and care.  They successfully pushed for changes in drug testing and approval processes, meaning that treatments could come into use more quickly.  Their early work set the course for subsequent success in the fight against HIV/AIDs, from the days when people with AIDS were only looking for respectful care before their deaths, to today’s long lifespans thanks to treatment, to tomorrow’s hope for a vaccine and a cure.  This work required vision and leadership, motivation, sustained effort, and adaptability.  These groups were not deterred by a system that was against them.  They used the skills and alliances they had to work toward specific goals and get the system to work for them.

When you consider that advocates began working for improvements in both care and policy more than 35 years ago, the amount of progress we have achieved together in 15 years is amazing.

Change that is deep, structural, and societal requires more years than we may anticipate.  When Eswatini enacted the Sexual Offenses and Domestic Violence Act last year, many lamented that it took nearly a decade to pass this law.

And while for many of us it may seem the most basic notion in the world that people should not suffer violence at the hands of a loved one, the details of the law that surrounded that premise needed to be debated before they could be embraced by a majority of the population.   The effort to pass the SODV Act is a model that all who seek legal or policy change in this country should emulate.  Civil society groups with different mandates and competing funding interests came together around a single clear goal.  They built awareness at grassroots levels, engaged traditional structures, found allies and potential allies in Parliament, waged media campaigns, and, when strategically useful, held public marches.

One hundred years ago, the U.S. Congress passed the 19th amendment to the Constitution, which would be ratified by the states a year later and grant women the right to vote, 144 years after our founding fathers declared that all men are created equal.  The persistence and bravery of the suffragists in the 19th and 20th centuries freed millions of women from political suppression. Their fight for equality at the polls did not take 10, 20, or even 50 years. The suffrage movement formally began in the 1840s and took 72 years to reach its goal.

The landmark Seneca Falls Convention of 1848 convened women activists and abolitionists, yet the idea of women voting, at a time when they could not own property or control fundamental aspects of their lives, was unimaginable. For decades, women endured beatings, jail, ridicule and ostracism. They marched. They launched hunger strikes.

They petitioned and strategized. They tried to vote when the law still said they couldn’t – and one was tried and convicted for this civil disobedience.  They mounted legal challenges and lobbied Congress.  They sometimes disagreed on strategy, struggled with finding funding, and established rival organizations with different approaches for obtaining the vote.  In the end, even in the face of multiple obstacles, women ultimately gained the vote.

The fundamental principle of human equality was still not effectively addressed, even after Congress voted in favor of women’s right to vote. When white women declared victory in the passing of the 19th amendment in 1919, black women remained as second-class citizens for many years to come. Likewise, Native American women’s voices and actions against oppression rarely factored in history’s retelling of the movement. The Black Lives Matter and MeToo movements clearly show that, even after historic milestones are achieved, there is still significant work to be done.  For the first time last year, two Native American women were elected to the U.S. Congress, one of whom had been part of a visiting delegation to Swaziland in 2017.

This may seem a small step forward that took a long time coming, but it is a landmark that we must recognize and use to propel us forward to ever more diverse representation.

Why was the right to vote so important?  Because without the vote, women were at a disadvantage in getting officials to craft laws and policies that responded to women’s needs.

The women at Seneca Falls highlighted that they had no input to the laws that governed them, including laws that removed women’s individual civil rights upon marriage, denied married women property rights, and did not allow married women to retain income they had earned.  If men were not being responsive with their actions in office, women did not have the tool to hold them accountable – voting them out of office.

A vote on its own is an important thing, but democracy works best when a collection of like-minded people can work, raise money, and vote for particular candidates and policies.  Even though the current constitution entered into force in 2006, there is lingering ambiguity about citizens’ abilities to use these like-minded associations – otherwise known as political parties – because some believe the 1973 Decree banning political parties remains in effect.  The African Union highlighted this concern in its observations on last year’s elections.  Some form of explicit action on the 1973 Decree will remove this ambiguity and help the country move on to more organized and productive policy debate.

It will also remove a lingering impediment from international engagements, and send a signal to potential investors that the country is moving in a positive direction.

As the country works to recover from a fiscal crisis, such policy debate will be more important than ever to ensure that all emaSwati are fully able to contribute to and benefit from fulfilling this country’s incredible potential.

In the same way this country has shown tremendous leadership in the fight against malaria, it can display vision in expanding space for civic engagement.

Eswatini now has four more years before the next elections, so this period should be about legislation and policy advocacy.  Some of that advocacy needs to be around practical matters in the running of elections, including appropriate locations for nomination processes and viable mechanisms for rapidly investigating and adjudicating reports of electoral fraud.  But there are many other laws and policies that need to be debated to equitably address the needs of the country’s citizens, such as the Intestate Succession Bill, the Legal Aid Bill, and the Media Policy.  As civil society groups and politicians consider their goals and strategies around these and other issues, I will leave you with some of the closing thoughts of the women at Seneca Falls:

“In entering upon the great work before us, we anticipate no small amount of misconception, misrepresentation, and ridicule; but we shall use every instrumentality within our power to effect our object.  We shall employ agents, circulate tracts, petition the state and national legislatures, and endeavor to enlist the pulpit and the press in our behalf.”

These approaches were ultimately a recipe for success for women in the United States.  I hope they will bring as much success to Eswatini.