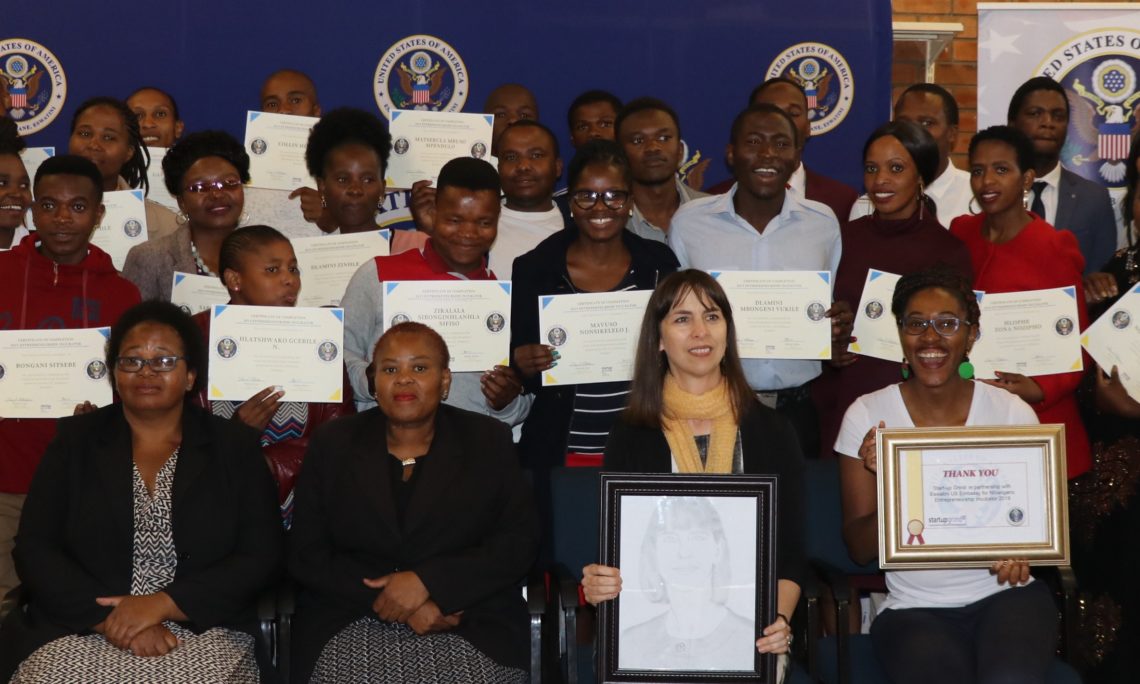 Congratulations for completing this Entrepreneur Incubator program!  Our hope is that this program has empowered you with new skills and confidence to drive your own success.  I would like to commend all thirty-three participants for being active members of the program for its duration. Such commitment will be necessary for the long journey ahead as you work toward improving your expertise in business.  This kind of dedication is essential for you to build your own opportunities, lift up your communities, and contribute to the economy of the Kingdom of Eswatini.

This is the second time we have sponsored Bertha Sithole to conduct this Entrepreneur Incubator.  She is doing tremendous work with the local Google Startup Grind, and she just returned from the U.S. where she participated in the prestigious Young African Leaders Initiative Mandela Washington Fellowship program.  Bertha is a prime example of drive and dedication when it comes to developing new initiatives. She developed and delivered the first Entrepreneur Incubator workshop in Mbabane, and it was so successful the first time, we decided to bring it to Nhlangano.  After finishing the first program, 16 young people registered new businesses and 6 of those are fully up and running. Bertha has given a huge amount of time and effort to these workshops, and today we celebrate the resounding success of the Entrepreneur Incubator.

The International Labor Organization (2017) estimates the unemployment rate among people between the ages of 15 and 24 in Eswatini is at 54.7%.  This is among the highest youth unemployment rates not only in Africa, but in the world.  The World Bank estimates that nearly 40 percent of His Majesty’s subjects live on less than 29 emalangeni per day.  The environment in which you are striving to develop new business ideas does not look fertile for small and medium-sized enterprises.  But true entrepreneurs can overcome such challenges, and your efforts are vital for the growth of any economy anywhere in the world.

Policymakers increasingly recognize that entrepreneurship and the spark of empowered youth drives economic development because it fosters growth, allows for technology adoption and innovation, and in turn alleviates poverty.  At the same time, despite the importance accorded entrepreneurship and youth in national development strategies, implementation of these priorities is proving to be a challenge.

Starting a business is a daunting task, with multiple steps, not all of which are straightforward. The entrepreneurial process requires you – prospective business owners – to have a tremendous amount of drive, to understand the development process, to know your communities and your market, to develop marketing plans, and to have a basic understanding of the day-to-day operations of a successful business. This program addressed these areas using the entrepreneur incubator curriculum, developed by the Department of State’s Bureau of International Information Programs.

Given gloomy economic forecasts, the current financial crisis, and declining revenue from the Southern African Customs Union (SACU), emaSwati need to dramatically shift their mind-set shift to turn around the youth unemployment situation.  This turn-around will have to be guided by the principles of good governance, accountability, transparency, and effective leadership.

One of the leadership traits for which I, as an ambassador, am held accountable is to model and lead by example in order to strengthen my organization and improve efficiency and morale.  As a development partner, I have serious concerns about the leadership example currently coming out of the palace.  While ministries try to apply the circular that limits international travel, royal children who have no clear role in multilateral relations are clearly visible at the United Nations General Assembly, adding an additional drain to the public budget.  As most ministries try to abide by the hiring freeze in an effort to meet IMF recommendations, we hear that more than two thousand positions have been created during the past year alone, many of them by the King’s Office.  While government has continued using its existing vehicle fleet, the palace sees fit to acquire more than a dozen Rolls Royce vehicles with a minimum price tag of 52.5 million emalangeni.  To accompany this royal fleet, there is now an even larger fleet of official escort vehicles, purchased with public funds.  We are supposed to take comfort in the fact that the Rolls Royces either came from His Majesty’s personal funds, or they were a gift and are the King’s personal business.  However, should the people of Eswatini really be comfortable with such disregard for the perilous fiscal state of the country, particularly with so many of His Majesty’s subjects living below the international poverty line?  Should people really believe that a possible multi-million dollar gift came without any strings attached?

I try to abide by a practice of sharing concerns in private before I say anything in public, but with His Majesty now in seclusion, such a courtesy has not been possible.  Unfortunately, the message I must deliver is the same one I have delivered since my first year in Eswatini:  It is exceedingly difficult for development partners to continue to advocate for assistance to Eswatini when such profligate spending, or suspicious giving, is taking place.  Would King Sobhuza have made such lavish purchases?  We know from his own words that he saw such “attachment to luxury” as the pitfall for empires.  More recently, a very eloquent liSwati related that such ostentatious acquisition felt like a spit in the face of this country’s people.  As someone whose government has partnered with Eswatini to respond to the needs of His Majesty’s subjects, I can say that we feel this sting as well.

If the economy of Eswatini is ever to successfully turn around and grow to meet this country’s incredible potential, young entrepreneurs such as yourselves will be critical engines for such growth.  But if expectations of good governance, accountability and transparency are not applied equally across all elements of government – palace, cabinet, parliament, and judiciary – significant and rapid economic growth will continue to elude this country.

A critical contributor to accountability and transparency is access to information.  Libraries are important to maintaining such access to information.  In that vein, I would like to extend my sincere appreciation to the Director and management of the Eswatini National Library Services for hosting this incubator program.  We have enjoyed a long and fruitful partnership here, and we are looking forward to strengthening this partnership through continued programs and workshops like this one.  I hope that you will long remain a center for the freedom of expression that is enshrined in Eswatini’s constitution.