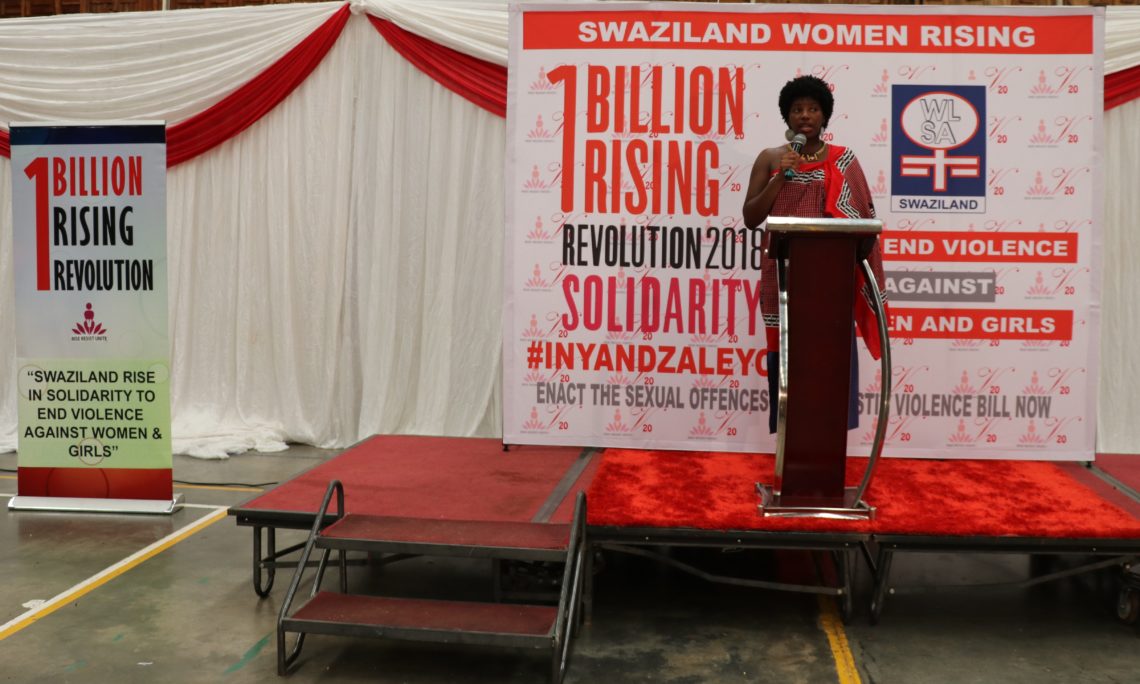 Lishonile and welcome to all!

It is an incredible honor and a privilege to be here today alongside so many revolutionary men and women who are champions of change. Your presence and your voices ensure that the rights of women remain at the forefront of our minds.

This year holds deep significance for Swaziland and for the United States of America. His Majesty the King turns half a century, as do the official ties between our great nations. Both of these landmarks will see robust celebrations – and we are excited to be a part of them.

Twenty-eighteen will also bring elections – in Swaziland, you’ll vote for Parliamentarians and members of Indvuna Yenkundla and bucopho while in the United States, we’ll hold mid-term elections in Congress.

The results of these races are almost certain to shake up our political landscapes – but only if we show up. And that is my key message today: “we are the change we have been waiting for,” proclaimed a young community organizer from Chicago. While his mantra of hope resonated far and wide, his words always reminded us of our own ability to manifest the changes we seek. It is as true for the American people as it is for the Swazi people.

This year, we count an unprecedented number of first-time women candidates in the United States running for everything from local school boards to state legislature to Congress. These women – numbering in the thousands across the country – grew tired of “waiting their turn.” They grew angry at the lawmakers that had failed to legislate and govern in their best interests. In turn, these trailblazers have redirected their frustration into a political movement, driving them to take action where it really counts: at the polls.

Women candidates are also joined by a growing number of female political campaign managers, who are helping to fundraise, organize volunteers, and balance candidates’ child care needs with campaigning.

We know that the ones who enjoy positions of power, prestige, and privilege often find little reason to disrupt the status quo.  It falls largely to those seeking an equal place in these systems to become disruptors – to change how people think, act, do business, and learn.

Revolutions, however, do not happen overnight, which is why we have to count those incremental successes on the road to gender equality.

I have felt energized by the sheer number of people debating the SODV Bill, the Marriage Act, and the Land Rights Bill. The responsibility to speak up about gender discrimination and injustice, in all its forms, falls to each of us.

Amidst all the cries for more women in the political arena, we have to demand quality over quantity. Absolutely, we want more women to join politics, but we also want them to be held accountable for their actions. We want them to understand and fight for our issues with courage and conviction, not simply gain power and position without a purpose.

The goal of electing more women into politics should be to elevate and address women’s issues, reshape how we all think about women’s roles in the political setting, and strive to create a legislative landscape that respects the rights, humanity, and dignity of all citizens.

For several years, Swaziland has had the lowest level of women’s representation in parliament within the SADC region.  His Majesty the King has called for women to strategize on how to increase women’s representation in public office. Vigorously responding to his call will help Swaziland gain the perspectives and experiences that can bring policy and legislation to a level that better benefits all Swazis.

None of the benchmarks outlined in Vision 2022 – from economic growth and development to peace and stability – is achievable without the deliberate and consistent inclusion of women.

This year marks the 170th anniversary of the United States’ first women’s rights convention at Seneca Falls, conceived and led in part by one of my favorite disruptors, a woman named Elizabeth Cady Stanton.

In thinking about Swaziland’s opportunities this year to move the needle on gender equality, I want to leave you with a thought from Ms. Stanton: She said, “the best protection any woman can have…is courage.” May we all have courage as we cast our ballots this year and as we continue this fight to end gender inequality.