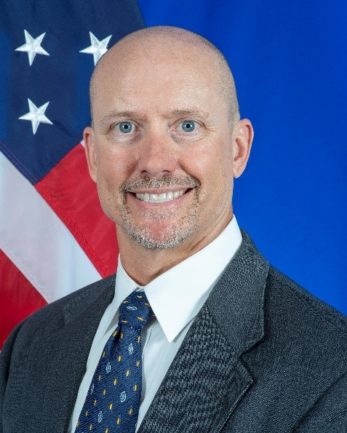 John Moyer is a management generalist who was born and raised in rural Pennsylvania.  In his previous job, he was the Executive Director for the Bureau of Human Resources, where his team issued all post assignment travel orders, managed a nearly $500 million budget, and developed/maintained all enterprise level HR IT systems.  Prior to HR, he served a year and a half with the International Narcotics and Law Enforcement Bureau administering projects to improve the justice sector, corrections system, and counter-narcotics efforts in Mazar-e Sharif, Afghanistan.

John started his Foreign Service career as a first-tour GSO in Frankfurt (2004 – 2006), followed by a consular tour in Ciudad Juarez (2007 – 2009), and then one year in Afghanistan as Field Support Unit Director in Kabul and Management Officer in Helmand with the U.S. Marines (2009 – 2010).  Following Afghanistan, John served three years as Management Officer for the U.S. Consulate General in Munich (2010 – 2013), just prior to his second tour in Afghanistan.

John is a U.S. Army Veteran and worked more than 6 years in construction before joining the Department.  He is married, has two children, and enjoys riding motorcycles and lifting weights.