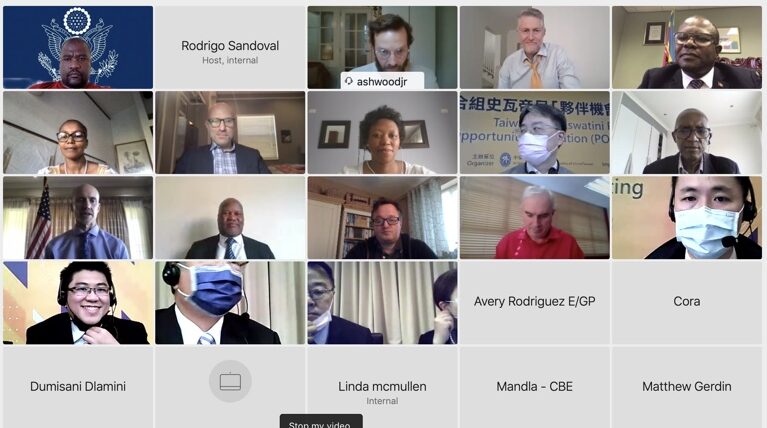 MBABANE – The U.S. Embassy in the Kingdom of Eswatini is pleased to join with the Taiwan Embassy and Eswatini’s Ministry of Commerce to explore private sector and entrepreneurship opportunities in Eswatini. Today, the U.S. Embassy hosted a virtual Partnership Opportunity Delegation composed of U.S. companies and companies from Taiwan to meet with Eswatini Minister of Commerce Manqoba Khumalo to discuss private sector opportunities in Eswatini. U.S. Ambassador to Eswatini Jeanne Maloney, Taiwan Ambassador to Eswatini Jeremy Liang, the U.S. State Department’s Managing Director for Global Partnerships Thomas Debass, and Prosper Africa’s Managing Director for Africa Operations Brinton Bohling welcomed executives from Eswatini’s eTrade hub, along with executives from five U.S. companies and eight companies from Taiwan who are dedicated to e-Commerce, information technology, financial services, and renewable energy.

The virtual Partnership Opportunity Delegation (POD) program featured a lively discussion by U.S., Taiwan, and Eswatini private sector representatives on pragmatic ways to support the information and technology sectors in the region, including the development of a regional eCommerce hub based in Eswatini to serve all of southern Africa. “Eswatini was specifically chosen by the African Union as the site for the southern African eCommerce hub because it is a vital and growing economy in southern Africa, and Taiwan is a close friend of the United States,” said Ambassador Maloney. “I’m happy that we are working together to strengthen private sector partnerships that will contribute to an important and growing information and technology sector in Eswatini, while also building business opportunities for U.S. and Taiwan companies.”

Ambassador Liang said “Taiwan enjoys a long, enduring and comprehensive relationship with the Kingdom of Eswatini and the United States. Taiwan is committed to working with international development partners in exploring opportunities to create mutually beneficial outcomes for all stakeholders.” Ambassador Liang also lauded the PODs Online Meeting, describing it as a milestone development in the Taiwan-Eswatini-U.S. trade and investment partnership.

Minister Khumalo praised this timely initiative that will help Eswatini attract private sector interest, particularly as the economy begins to recover from the negative impacts of COVID-19. “The people of Eswatini remain resilient and resolute in our efforts to develop a robust and diverse economy,” he declared. He added that creating a regional eCommerce hub in Eswatini “reinforces Eswatini as the perfect destination for multinational corporations seeking a regional hub to serve the southern Africa market.” He highlighted that U.S. and Taiwan businesses would see that Eswatini’s geographically significant location in southern Africa, its expanding infrastructure, and political stability continue to make Eswatini an attractive place for investment.