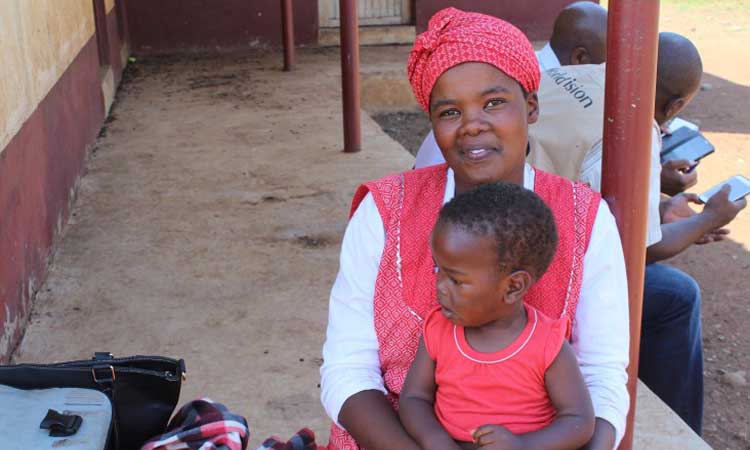 Setsabile and her son Njabulo.

February 2017—In the Lubombo region of Swaziland, 18-year-old Setsabile* and her baby boy, Njabulo, are experiencing the devastating impacts of the current drought, recorded as the worst in 35 years for Southern Africa.  “I am worried because we face a bad situation due to drought,” Setsabile explains. Her husband has found occasional work in nearby sugarcane fields but, for the most part, he is unemployed.

Triggered by the 2015/2016 El Niño phenomenon, nearly one in three people in the small landlocked nation of Swaziland are currently food insecure, and approximately 18 million are food insecure across Southern Africa, according to the Famine Early Warning Systems Network. In Swaziland, many have been hit by two or three years of consecutive drought and poor harvests. In an area that depends heavily on rain-fed agriculture and labor employment in the sugarcane industry, the effects have been harsh.

Much of the area’s population relies on agricultural labor to earn money to buy food when their own harvests are low. But Lubumbo region is one of the most drought-affected regions of Swaziland, with the highest reported number of cattle deaths, and very little pasture or available water.

USAID and implementing partner World Vision are providing much needed emergency food assistance to families who have very few ways to cope. Until the next harvest, USAID is aiming to reach 45,000 food insecure people with monthly food rations of cornmeal, beans and vegetable oil, for a total of more than 4,600 metric tons of food. Most of these people will receive their food in exchange for work building or rehabilitating community assets, such as structures to prevent soil erosion and the formation of gullies.

Hlobisile Dlamini, a 32-year-old mother of four children, explains that nearly all of her family’s crops failed last year. She and Setsabile are coping by eating only one meal per day. Moreover, Dlamini’s daughter has been forced to drop out of school because the family cannot afford the required school fees. But, Dlamini explains, “The food we receive really helps.”

In addition to the drought, families in Swaziland face another challenge. Kathryn* and her 13-year-old grandson are struggling after all five of Kathryn’s children passed away due to HIV/AIDS, a devastating but common occurrence in rural Swaziland. The country has one of the highest HIV/AIDS prevalence rates in the world.

Droughts are particularly hard on people living with HIV/AIDS, who must take medication with food and water for the treatment to be effective. With food assistance from USAID, they are not forced to choose between food and medication—which they otherwise would have to do, since they can’t afford both—allowing them to live a healthier life.

Families in Swaziland hold onto hope that the rains will come and lead to a better yield than last year. In addition to providing food assistance, USAID and World Vision are providing community-based screening for malnourished children along with supplementary foods to prevent and treat malnutrition. USAID and World Vision are also working to strengthen agricultural production to help families recover from the current drought and to help farmers like Dlamini cope with future shocks. World Vision is distributing seeds and livestock feed, training farming households on conservation agriculture practices, and facilitating access to livestock markets. USAID is sowing the seeds for longer-term resilience by funding the immediate food assistance response as well as recovery efforts through agricultural interventions.

But for now, the food assistance from USAID is their lifeline, especially approaching the peak of the hungry season, which is expected to last through March 2017.

Since 2015, USAID has provided over $340 million to six countries in Southern Africa for drought response, including $9.5 million to Swaziland in 2016. Although the 2015/2016 El Niño has ended, its effects will continue to be felt for months to come. USAID is responding with robust emergency activities and by funding efforts to build resilience by mitigating impacts, protecting gains, and accelerating recovery.