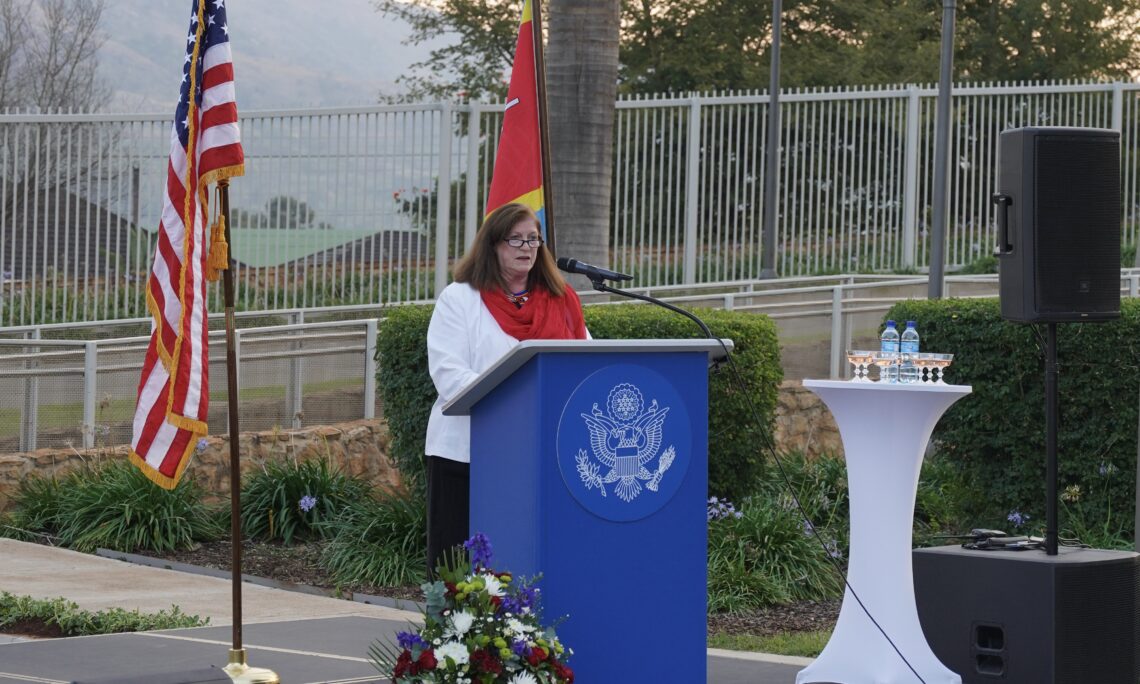 Thank you for joining us today to commemorate the Independence Day of the United States of America. It has been a long three years since we have been able to hold this event, and I am delighted that we can once again come together and celebrate.

This 4th of July marked the 246th anniversary of the signing of our Declaration of Independence. It is an interesting document that laid out a couple of ideas that were revolutionary at the time. One was the concept that “all men are created equal, that they are endowed by their Creator with certain unalienable rights, that among these are Life, Liberty, and the pursuit of Happiness.” The second concept was that the reason governments exist – the only reason cited in the Declaration – is to secure these rights for the people.

Interestingly, the Declaration makes no mention of democracy. Our founders did not reject the concept of monarchy.

Their complaint was that their monarch did not respect the rights of the people. Although the United States later adopted a republican form of government, we enjoy strong relationships with countries with a variety of political systems, including monarchies. As an example, we have maintained strong and enduring relations with the Kingdom of Eswatini since its founding in 1968. We value our relationship with Eswatini, which is built on mutual goals.

In thinking back on the challenges we have faced these past three years—and they have been dramatic—I am struck by the opportunities for partnership. The COVID pandemic, climate change, and the need for economic growth are major challenges. And we know that whatever the challenge, working together improves our ability to surmount them and harness opportunities.

We have continued to collaborate with the Government and our network of partners to accomplish mutual goals.

For example, this is the 17th year that Eswatini has been a partner under the U.S. President’s Emergency Plan for AIDS Relief (PEPFAR). PEPFAR has been working with Government, health leaders, civil society, and others to combat HIV/AIDS in Eswatini. It is an investment in saving lives – a symbol of our friendship as nations and the generosity of the American people. When PEPFAR began work in Eswatini, fewer than 500 people were on life-saving anti-retroviral therapy. Today, thanks to our partnerships, effective treatment, and a range of prevention tools, Eswatini is in a very different place. Right now, roughly 95 percent of HIV positive people in Eswatini are on treatment and able to live productive, healthy lives.

As the COVID-19 pandemic swept the globe, the investments made through PEPFAR became instrumental in combatting this new virus. PEPFAR-supported public health, clinical care, laboratory, supply chain, and data platforms have been – and remain – vital in the ongoing fight against COVID-19.

The U.S. has provided Eswatini with hundreds of thousands of doses of COVID vaccine – at no cost – to help stem the global pandemic.

We have accomplished much together in other sectors. For example, the U.S. invested in the future of Eswatini by helping to renovate, expand, and improve a primary school in rural Shiselweni with U.S. Department of Defense funding. This project addressed student over-crowding and expanded the curriculum and facilities for students.

Through the Ambassador’s Special Self-Help Program, we have encouraged self-reliance within local communities by providing some of the resources needed to turn a good idea into action. In just one example, we worked with the Bhadzeni 1 community to provide funding for materials they then used to construct a block of classrooms. The children of this community no longer have to travel ten kilometers to the nearest high school.

We also provide exchange opportunities for Young African Leaders to visit the United States and learn through U.S. leadership institutes. We sent ten young leaders to the U.S. just last month, and they will return as alumni and engaged young leaders empowered to help drive their own initiatives in the future.

The U.S. is helping to build trade relationships and create jobs. Eswatini’s goal of becoming a private sector, export-led economy, is being supported by the partnership between the Eswatini Investment Promotion Authority and the USAID Trade Hub. This partnership takes full advantage of the African Growth and Opportunity Act, which provides duty-free access to over 6,000 product lines. We are also working to attract U.S. investment in Eswatini through commercial advocacy and by advancing a level playing field for U.S. companies overseas.

This is important; U.S. law prohibits a U.S. person or company to offer, pay, or promise money or anything of value to any foreign official for the purpose of obtaining or retaining business. Transparency and integrity are hallmarks of U.S. business.

The U.S. government is also investing in green solutions to institutionalize a culture of sustainability and climate preparedness. The U.S. Embassy in Eswatini is doing our part. Our embassy compound—this beautiful space around us—has been certified by the U.S. National Wildlife Federation as a wildlife habitat. Only 24 other U.S. embassies in the world have this qualification.

The United States is proud to invest in the future of emaSwati through these different avenues – and more. As Eswatini prepares for national dialogue, we hope that all emaSwati contribute to a peaceful environment that supports constructive, non-judgmental dialogue, peaceful reform, and healing.

It has been 246 years since the Declaration of Independence was signed, and we recognize that we have often fallen short of the ideals expressed in it. It took almost 90 years and a bloody civil war for America to abolish slavery and another hundred years to pass civil rights legislation. It took 143 years for women to gain the right to vote. Today we are still working to create the “more perfect union” called for in our Constitution. However, the ideals expressed in the Declaration of Independence still reflect our core beliefs as Americans – the lens through which we tend to view the world. President Biden has asked U.S. Embassies to reiterate the importance of these democratic values to our partners around the world – to defend freedom, create opportunity, uphold universal rights, respect the rule of law, and treat every person with dignity. I believe that our work in Eswatini over the last several years has supported these values, and we look forward to continuing these efforts in the years to come.

Once again, thank you all for joining us today. We deeply appreciate our partnership with the people of the Kingdom of Eswatini.